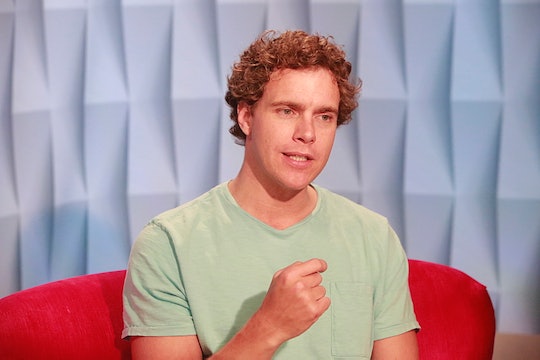 What Does Frank's Girlfriend Think Of Bridgette On 'Big Brother'? She Hasn't Said Too Much

When we have a Big Brother houseguest like Frank strutting around the place, "bopping" women on their butts and generally be the controlling and sometimes misogynistic wannabe leader of the house, we've got a problem. It's hard enough to root for someone on the show without alliances and personalities seeming to shift every week. So you really can't imagine what Frank's girlfriend thinks of Bridgette on Big Brother, or for that matter, what she thinks of his behavior overall. Unfortunately (or fortunately) for us, she's too classy to take any frustrations to social media, but as of July 6, her Instagram shows a very supportive girlfriend who still misses her guy and co-parent of their adorable puppy. So, regardless of Frank being to handsy with Da'Vonne or cuddling in bed with Michelle, his girlfriend is likely giving him the benefit of the doubt.

According to Frank, his girlfriend of about four months, Ashten Owens, wasn't thrilled about him going back to the Big Brother house, but when Julie Chen calls you up, you've got to give Chenbot the time of day, right? OK, so it probably wasn't like that, but Frank obviously couldn't say no to another shot at that $500,000 prize and decided that his young relationship was strong enough to survive it. Also, being in a heavily monitored house makes it next to impossible to actually cheat on any significant other you left back home. Ha, right.

But does cuddling count? Because lately, Frank and Bridgette on Big Brother are each other's main squeeze in the cuddling department, like literally. Of course this could all change once there is a new HOH and Frank doesn't need Bridgette anymore, so perhaps his girlfriend understands the part he's playing right now in the Big Brother house.

But even if Frank's girlfriend is OK with his affection for Bridgette, there is still the little (huge) matter of his behavior with women elsewhere in the house. The constant smacking of Da'Vonne's butt until she was in legit tears of frustration, the fact that he seems to always target women when the topic of eviction comes up, and the little tidbit he revealed about the rule of 15 he claims to have with his girlfriend. What's this rule, you say? Oh nothing, Frank just suggested that if she gains more than 15 pounds, they're done.

Obviously this could just be Frank trolling the house houseguests hard, because we all know he enjoys attention and any kind of shock value, but joke or not, it's just another disgusting thing to add to the growing list of Frank-isms that no one is loving. And if Frank's girlfriend develops any steadfast opinions about him and Bridgette on Big Brother, I don't expect her to love them either.