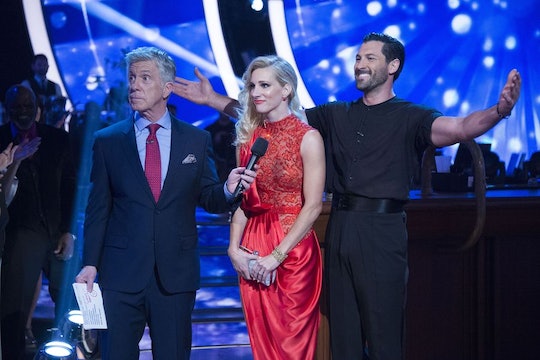 Heather Morris Has Nothing But Love For 'DWTS'

I think it’s safe to say that most viewers found Heather Morris’ elimination on Dancing With the Stars one of the most surprising of the season so far. And it undoubtedly shocked both Morris and partner Maks Chmerkovskiy too, but what does Heather Morris think of Dancing With the Stars now that she's no longer competing on it? Her surprise elimination after her Week 6 performance was a shock to pretty much everyone, especially since it followed the first perfect score of the season.

After last week's episode, Morris spoke with Entertainment Tonight and had only positive things to say about her experience on the show. "You don’t really know what’s coming next," she stated. "So, you know, I was kind of preparing for anything that could happen or come my way." She went on to say that she’d reminded herself that even if she was eliminated to "just be positive and go out the right way."

Luckily, Morris did go out the right way since Chmerkovskiy’s return meant that the pair could dance together one last time and even earn the only perfect score of the season up until that point. And throughout her time on the show, she definitely faced her fair share of obstacles. From Chmerkovskiy getting injured early on in the season to troupe member Alan Bersten filling in as her pro partner, she had a lot of adapting to do, but she did it with such grace and obvious talent.

As the eliminated contestants and pros typically do, Morris appeared on Good Morning America the next morning to talk about her still so shocking elimination from DWTS.

"You know, it’s reality television and so many things can go wrong," Morris said. "When it happened I was just like, you know, it is what it is and things will happen as they may." She seems to have been able to remain positive and hopeful and overall "had a wonderful time" on the show. She clearly harbors no ill will toward DWTS or her experience in general.

Luckily, she went out with a bang and as DWTS host Tom Bergeron said, she also evoked the biggest audience reaction to any elimination he’d ever heard. It was definitely the way to go out, even if it was still hard to believe when it happened. But if Morris can see the good in her experience on DWTS and is grateful for her time on the show, then eventually we can all come to understand it all. Eventually.