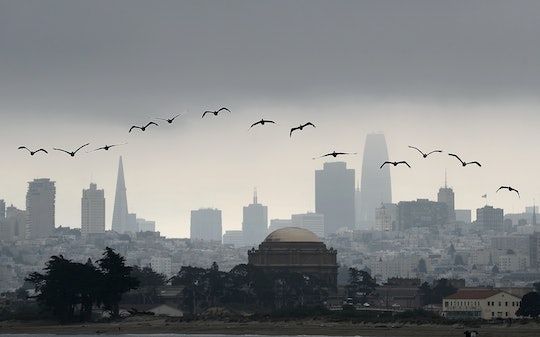 The unprecedented wildfires that continue to rage in California are nothing short of horrific. Watching the footage on TV of the charred destruction is like watching something out of an apocalypse movie. It's a tragedy for the people affected directly by blaze, but it's also a huge problem for the entire state of California which is now being subjected to some treacherous air quality. If you're wondering what if means when the Air Quality Index is over 150, it's time to dig into the numbers.

The Air Quality Index, or AQI, is a tool used to tell how clean or how polluted the air is, according to AirNow, a website of the Environmental Protection Agency (EPA). "Think of the AQI as a yardstick that runs from 0 to 500. The higher the AQI value, the greater the level of air pollution and the greater the health concern," explained AirNow.

Essentially, any AQI value under 100 is acceptable, but if you start getting readings higher than that, you start entering some dangerous territory, explained AirNow: A reading of '101-150' is categorized as being "unhealthy for sensitive groups," and a reading of '151-200' is deemed "unhealthy for everyone." An AQI reading of '201-300' means the air is considered a high alert and is "very unhealthy for everyone," and if you reach the worst case scenario — a reading between '301-500,' you're in the highest level of danger, or the 'Hazardous' range.

If you're living in California and want to check what the AQI is in your town, you can visit the AirNow website for the state of California, which provides the specific AQI for all California cities. At the time of writing, several California cities, including Sacramento, Arden Arcade, Chico, and Elk Grove had an AQI that exceeded 300, according to AirNow, which means that the public is under emergency level conditions.

What's more, since November 15, certain parts of smoldering Northern California have been found to have, "the dirtiest air in the world, topping notoriously smoggy cities in India and China," reported the San Francisco Chronicle, citing data from the air quality monitoring network Purple Air.

With statistics like that, it's only natural to wonder how the poor air quality caused by the wildfires will impact health. "Fine particles from the wildfire smoke can settle in lungs and irritate respiratory systems. Children, older adults and people with heart or lung conditions are especially at risk when air quality diminishes," explained the same San Francisco Chronicle.

For healthy people, the poor air quality caused by the fires may cause burning eyes, scratchy throats or chest discomfort, according to ABC News. Yet there's a lot that still needs to be understood about the increased frequency of wildfires and what affect they will have on long-term health, the article says.

It's also important to consider the brave men and women battling the blaze, and those conducting search and rescue missions in the fire-decimated areas. "A monitoring station in Palermo, California, near the Camp Fire said levels of pollutants are 13 times higher than at a station near the Nevada state line in Truckee, California," according to CBS News.

If you're looking for ways to help the victims of the Califiornia wildfires, and the firefighters and first responders in the field, there are several great organizations that are already distributing much-needed aid, like the American Red Cross and the California Community Foundation Wildfire Relief Fund.

More Like This
Banana Boat Sunscreen Has Recalled Products That Were Found To Contain Benzene
How To Avoid & Treat Lyme Disease
New York Can End Religious Exemptions to Vaccine Mandates, Says A Federal Appeals Court
Gathre’s Winnie The Pooh Collection Is Finally Here