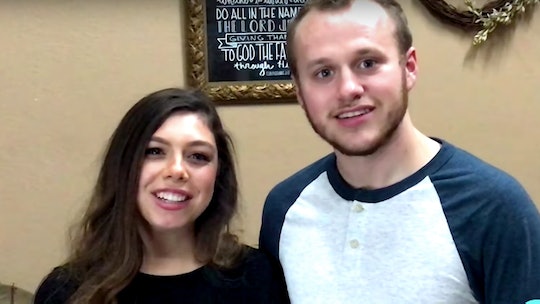 There's been a lot of news coming from the Duggar family recently. From babies to pregnancies to engagements and more, it's been hard to keep up. So, following the news that Counting On star Josiah Duggar is officially engaged after a short courtship, you may be wondering what exactly Josiah Duggar does when he's not on TV. Well, the 21-year-old followed in his father's footsteps career-wise.

Duggar fans have definitely been ecstatic lately with all the happy news coming from Arkansas. Joy-Anna and her husband, Austin Forsyth, welcomed their first child — a baby boy! Jinger and her husband Jeremy Vuolo are expecting their first child, as are Joseph and his wife Kendra. Seriously, a lot is happening in the Duggar family right now.

Given all that's happening, in case you missed the happy news about Josiah, don't worry and allow me to catch you up. It was only a little over a month ago when it was announced that Josiah was courting family friend Lauren Swanson. And then, on March 5, they announced their engagement. And considering the fact that Josiah will soon be expected to provide for a wife, it's a pretty fair question to wonder what Josiah actually does. Considering the Duggars don't really do the traditional college-to-career route, it's unsurprising that Josiah has reportedly gone into the real estate business, just like his father, as In Touch Weekly reported.

At just 21, Josiah is pretty young and has his whole life ahead of him to figure out whether he wants to continue in real estate or try something new. But, according to In Touch Weekly, back in 2016 Josiah was "acquiring a real estate license to work in the Duggar family business and was working on getting his pilot's license." Of course, this was a couple of years ago, so it's a definite possibility that Josiah has changed career paths or could be ultra successful in this field.

Nevertheless, given what he shares on his Instagram account, it seems like Josiah's main concern right now is being there for his wife-to-be. In the couple's statement released to People about their initial courtship, Josiah explained just how lucky he felt to be with Lauren:

We are overjoyed to begin this new phase of our lives together. Through the years our families’ friendship has allowed us to get to know one another as friends. I can definitely say I have found a great friend … even better than I could have hoped for or imagined.

The 21-year-old and his now-fiancée seem extremely happy, but that doesn't mean that Josiah hasn't had his fair share of heartbreak or hard times.

Back in 2016, Josiah was in another courtship with Marjorie Jackson, but it ended after four months. Speaking to People, Josiah explained, "Marjorie and I had a good time together. We were just trying to follow God’s lead on everything. She didn’t feel that it was the right timing then, so we called it quits for a bit."

Now, it seems as though Josiah and Lauren are full-force ahead. And in addition to his reported real estate and piloting efforts, Josiah has also completed Alert Academy Training, according to an Instagram post he shared in August of 2017. The training is supposed to help trainees become an "air land emergency response team" and it does so because it "provides its men with a fine-tuned combination of Christian discipleship, community service, and career training that you won't find anywhere else on the plane," according to the website.

Additionally, Josiah and Lauren have already shown a passion for travel, as the two spent time together in Australia during a Duggar family vacation recently. So while the two work on starting their life together, Josiah seems perfectly prepared to support his soon-to-be wife.