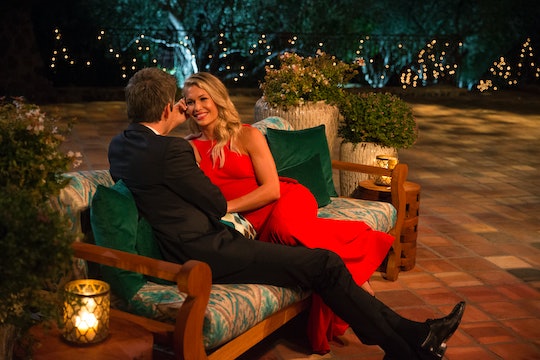 There's No Love Lost Between Krystal & Bibiana On 'The Bachelor'

Even though each season of The Bachelor claims to be the "most dramatic season yet," you can't deny that Season 22 is already starting to deliver on that promise. I'm referring, of course, to the recent blowout between Bibiana Julian and Krystal Nielson, which stemmed from Krystal constantly interrupting Arie's time with the other women. So now that their first argument has aired on the show, what does Krystal think of Bibiana on The Bachelor? There certainly doesn't seem to be any love lost between these two contestants. And since it looks like things will only continue to escalate from here, the ongoing drama could led to both of them getting eliminated if they aren't careful. (Personally, I see a two-on-one date in their future, with Arie eliminating one of them right then and there.)

But while it’s clear that the women didn't get along while filming this season, you can't help but wonder what their relationship or interactions have been like outside of the show. On Krystal’s part, the online health and fitness coach hasn’t said anything about their verbal altercation on social media and instead has chosen to post on Instagram about Arie and their budding relationship on The Bachelor. Though she hasn’t said anything one way or the other, I don't foresee them hanging out now that The Bachelor has stopped filming. But hey, you never know.

The Bachelor is no stranger to misleading fans with the promos for each episode. In the past, there have been scenes in the previews that played out quite differently in the actual episode. But judging by the promo for Episode 3, it seems like Krystal isn't going to be holding back, despite Bibiana telling her last week that she dug herself a hole by alienating herself from the other women.

In the promo, you can hear Krystal saying, "I can’t let others' insecurities get in the way of the reason I’m here… He needs to know," right as the scene cuts to Bibiana crying. Later, Bibiana tells the camera through tears, "I am broken." Clearly something goes down to upset Bibiana throughout the episode and Krystal is the only contestant she’s had an issue with so far.

If I had to guess, I would say that the drama between Bibiana and Krystal is far from over, especially if Krystal does tell Arie something that negatively impacts one of the other women. The whole argument that began this feud was because Bibiana felt that Krystal was unnecessarily monopolizing Arie's time since she already had a rose and was safe for the week.

On the one hand, I can see Bibiana’s dilemma. She’d been vying for his time all day and didn't get the opportunity that a one-on-one date presents. Yet Krystal had been given a special date to meet his family and learn more about him away from the show, and still sought him out during the cocktail party. From Bibiana’s point of view, that was unfair and selfish of her.

But on the other hand, Krystal didn't go on The Bachelor to make a new BFF or to get to know anyone else other than Arie. As she said herself, if Arie was around and in another room, she wasn't going to sit around and not see him since it had been a couple of days since their date. As with most fights on The Bachelor, it’s a tough situation and one where you need to try and look at it from all sides.

So far, Krystal hasn't said anything about what she thinks of Bibiana or her experience on the show as a whole. But since she hasn’t come out with any negative or harsh comments, perhaps she found it easiest to leave the turmoil back at the Bachelor Mansion.