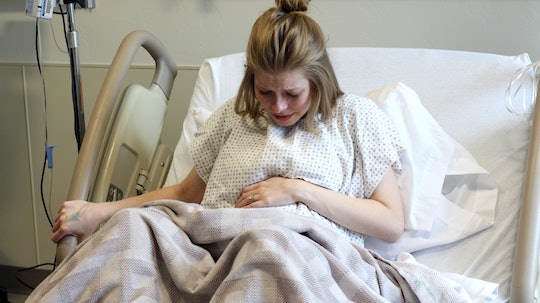 "Lazy Uterus" Is The Postpartum Complication You Haven't Heard Of, But Need To Know

Whether you're expecting your first child or prepping for baby number two (or more), you're probably familiar with the common symptoms and various changes your body will go through. But for all the quirky colloquialisms and parenting memes that flood your news feed, there's still one term you may not be familiar with just yet. So, what is a lazy uterus? Besides being the next hashtag in a long line of pregnancy-related topics, it happens to be a very real — and potentially very dangerous — condition that can affect a woman's reproductive system after she has given birth.

Despite how it sounds, this isn't just some way of saying your uterus could improve its work ethic. Though the catchy nickname sounds at home among such gestating gems as lightning crotch during pregnancy or the C-shelf after a Cesarean section, its actual medical definition is far from it.

To help re-frame the context of this condition, it might help to use the clinical term instead. Uterine atony is, "when the uterus fails to contract after the delivery of the baby," according to the official website for Healthline. This is dangerous because, without your uterine muscles compressing, there is little to no pressure being placed on the surrounding blood vessels to prevent bleeding. "It can lead to a potentially life-threatening condition known as postpartum hemorrhage," which is when a woman experiences excessive bleeding after giving birth, as is explained in the aforementioned report. The most recent estimate is that nearly three percent of women experience postpartum hemorrhage caused by uterine atony, according to a recent study published in the American Journal of Obstetrics and Gynecology. So are there any ways to predict if you might be at risk?

As it turns out, there are quite a few things which can put you at a greater chance of developing uterine atony after giving birth. For instance, "prolonged labor, augmented labor, preeclampsia, multiparity, and placental abruption," are risk factors for uterine atony, according to a report released by the American College of Obstetrics and Gynecology (ACOG). In simpler terms, if you've been in labor for a long time, were given something to help things progress, have high blood pressure-related complications, previously had twins (or multiples), or your placenta has detached or been otherwise compromised, you could be at an increased risk of experiencing postpartum uterine atony.

Thankfully, knowledge is half the battle and, once you know what to look out for, you and your medical team can take preventative measures, monitor any changes, and make a plan for treatment, if necessary. Now that you know the way your medical history can factor in, it's also a good idea to learn about the symptoms of uterine atony, too. "Uncontrolled bleeding, decreased blood pressure, increased heart rate, swelling, and pain in the vagina," are symptoms of uterine atony, according to the University of Rochester Medical Center's official site. Of course, these are all signs that are fairly easy to spot, especially if you've already discussed the situation with your labor and delivery medical care team.

You can even incorporate certain preventative actions into your birth plan to decrease your risk for any kind of postpartum-related bleeding issues. The World Health Organization (WHO) recently reported that giving birth in a medically-equipped location, delaying cord clamping, receiving oxytocin (during labor), and uterine massaging can prevent uterine atony and postpartum hemorrhaging. Though talking about complications after delivery isn't a topic that anyone really enjoys discussing, hopefully you can breathe a little easier now that you know what a lazy uterus is, who is most at risk, what the symptoms are, and how to prevent uterine atony and associated postpartum hemorrhaging.

Of course if you are concerned for any reason that you might fall into the category where you might be at risk, have a conversation with your doctor about the steps they would take to resolve any related issues.