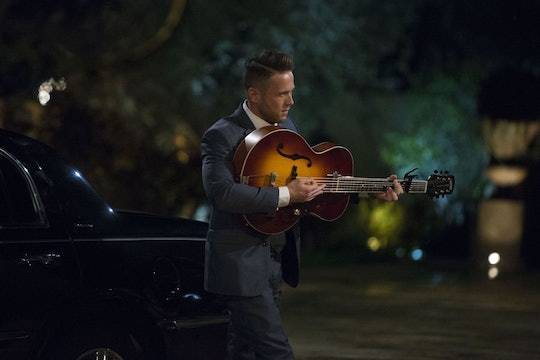 Lee From 'The Bachelorette' Is A Performer

When you meet someone new, the most important thing is leaving a lasting impression, so when the guys exited the limo on the Season 13 premiere of The Bachelorette, they had around 60 seconds (if that) to do something to leave their mark on Rachel. For Lee, that was playing his guitar and singing a song he said he wrote for her. But besides being the season’s requisite singer/songwriter, what does Lee from The Bachelorette do? The contestant is apparently all in when it comes to show business.

He recently got some attention on the show when he got into it with Eric, who he claimed didn’t have enough romantic experience to be serious about Rachel. But besides being the potential pot stirrer of this season of The Bachelorette though, Lee is a singer from Jacksonville, Florida who currently lives in Nashville and seems to have made a career out of his talent, as opposed to using it as a side gig of sorts.

In his Bachelorette bio, Lee said that he’s played at almost every small venue in Nashville, so he’s more serious about his music than just bringing his guitar on the show for appearances. Although Lee’s LinkedIn profile lists his profession as a combination of professional actor/singer songwriter/bartender/small business owner, it’s unclear what small business he’s referring to, unless of course he means the business of trying to make it big with his singing.

Although he lives in Nashville now, possibly to pursue his musical dreams, Lee attended the University of Florida from 2005-2008 where he studied psychology. Unfortunately, his social media pages are private, but his Facebook bio does say a little bit about how he sees himself: "Pleasantly Offensive.Exceptionally Southern.Facetious.Loyal."

But the most important thing about Lee on The Bachelorette this season is if he’s there for the right reasons or to further his career as an entertainer. He recently came under fire for some questionable tweets he posted prior to coming on the show, but he seems genuinely excited to get to know Rachel. In an interview with The Hollywood Reporter, Lee previously said that after he learned who the Bachelorette was going to be, he was even more excited to participate in the season.

"Rachel was probably the classiest girl on the season, and it was something else," Lee said. "Then I started really paying attention to her and who she was and learning things about her. I got more excited as time went by."

The Nashville singer/songwriter seems to be there for her. When it comes to the other men on the show, however, Lee is quickly gaining enemies. Will the drama eventually overshadow any potential interest Rachel may have in him? Only time will tell, but for now, Lee is still in the running.