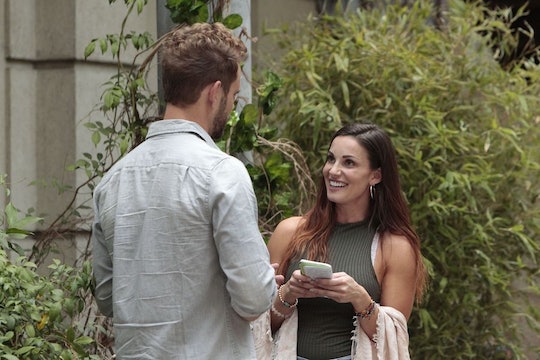 Liz Has An Important Message For 'Bachelor' Fans

On Monday's episode of The Bachelor, there were two group dates, the first one-on-one, a slap, some re-interruptions, and a break up — all within the span of two hours (including commercials). And we're only just getting started. I honestly expected Liz to last a bit longer than she did, but apparently her past with Nick was too much for him. So what does Liz think of The Bachelor now that she's no longer apart of the show? The former contestant has been pretty silent on social media and in the media in general. She, unlike the Bachelor himself, hasn't said much — if anything at all — about The Bachelor or her premature elimination. I mean, she didn't even get to go to the second rose ceremony and her bags were probably still packed. Tough break.

Now that The Bachelor has finished filming, Nick has been making the publicity rounds and continually talking about his experiences each week. In an article for People magazine's blog, Nick wrote, "I respected the fact that she was willing to take a chance, even though we hadn’t spoken in months. But as our conversation continued, I wasn’t able to get a real answer as to why she was here or what changed after our first encounter at the wedding. After talking with her at length, I thought it was best for both of us that we say goodbye." And OK, that's fair, but what does Liz think of The Bachelor and how everything went down?

The lifestyle coach and travel blogger has been as zen as ever via social media since the season began and since the second episode aired, which showed the awkwardness between her and Nick intensify as the hour went on. While most viewers can see both sides of the too-little-too-late type of thing going on between Liz and Nick on The Bachelor, it's still a sad day in Bachelor Nation when someone gets sent packing before the official ceremony.

The only inkling of Liz addressing The Bachelor and the recent developments in the short-lived Nick/Liz saga, might be the series of hashtags under her most recent Instagram photo that was posted on Tuesday, Jan. 10, one day after The Bachelor episode aired.

Liz captioned the photo with: Unapologetically myself. #risk #love #livefree #runwild #speaklife #daringgreatly #untamed #aromancedlife. This may not have been a direct response to her actions with Nick on The Bachelor and the disappointing way everything played out, but for right now, it might be all that fans are going to get from her. At least it seems like she doesn't have any regrets of taking a risk for love. And that's what matters.