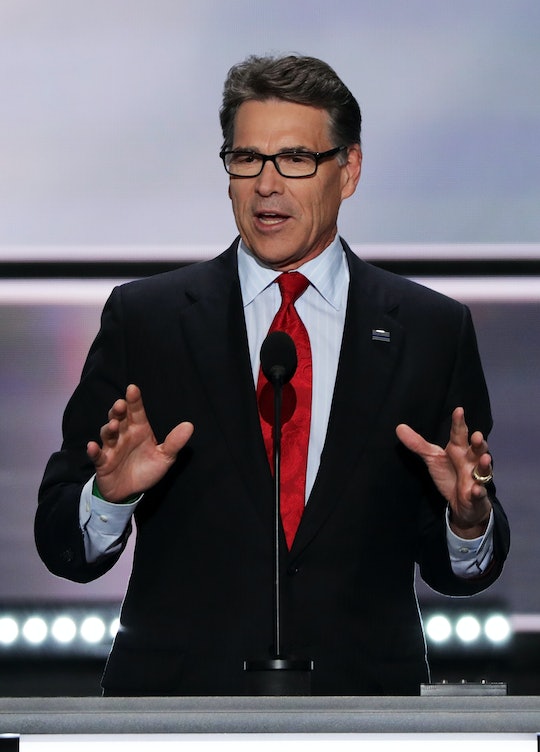 What Does Rick Perry Think Of Donald Trump? The 'Dancing With The Stars' Star Supports Him

Once upon a time, Rick Perry was a Republican candidate hopeful for the 2016 presidential election and aiming to beat out Donald Trump for the position that Trump holds today. Perry even reportedly bad-mouthed the candidate multiple times, but now that he's out of the running, what does Rick Perry think of Donald Trump? They say that if you can't beat them, join them, and honestly that seems to be what Perry has done, doing a total 180 on what seemed to be his negative opinions of Trump early on.

Back in July of 2015, before the presidential candidates were narrowed down, Perry spoke at the Opportunity and Freedom PAC forum in Washington, D.C. and had a few choice words about Trump, saying, "Donald Trump’s candidacy is a cancer on conservatism, and it must be clearly diagnosed, excised and discarded," pointing out what he believed to be the presidential candidate's major flaws in his political campaign. So judging by something like that, one would assume that Perry has no support for Trump and that there is no love lost between the two of them. Surprisingly, though, that's not necessarily the case. In fact, it seems that now that Perry has dropped out of the race due in part to low funding, his opinions on Trump have totally changed.

So does Perry support Trump now? A year can apparently change a lot in a presidential hopeful, especially when his own campaign falls on hard times and he sees no other way out but to respectively step down on his terms. Because despite what Perry has said about Trump in the past, the Apprentice star now has a supporter in Perry. In a CNBC interview from the Republican Nation Convention, Perry was clear on his decision to completely support Trump as opposed to Hillary Clinton for the new 2016 president, since Trump is the candidate whose values and goals align more closely with his own.

"I'm a Republican, and it's either gonna be Donald Trump or Hillary Clinton. Come on, folks - let's get on the team and pull this wagon... If you want to let personality get in your way of reality, you may, but I don't think that's wise. This is about the future of America."

Perry is obviously ready to support Trump in his campaign for the 2016 presidential election, but in the meantime, Perry seems to be taking some time off from his endorsement of Trump to prepare for his daughter's wedding. And in order to do that, he's agreed to compete on Dancing With the Stars. The dance floor is a big change of scenery from the presidential campaign trail, but at least there, he's under a lot less pressure.