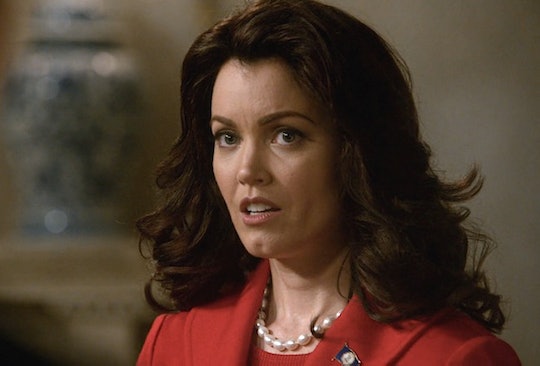 What Does Rowan Have On Mellie On 'Scandal'? Maybe Enough To Beat Her In The Election

If you take a second to think about all of the players on Scandal, you'll find that there are far too many morally gray areas and that not one of them is inherently "good" anymore. Which leaves you to root for bad guys, essentially. Or, the not-as-bad as the other guys. But what happened to Mellie on Scandal to bring her to the darker than dark side? She's certainly spent enough time being the legitimate victim that any of her wrongdoings are almost forgiven, but allowing an entire jury to be murdered for personal gain? Yeah, not so much.

Right now, Mellie is running for the Republican spot in the presidential race of the Scandal world, but getting her political career off the ground came at a serious price, costing her both Fitz and any moral fibers she had left in her. In order to cover up her affair with Andrew and get her spot in the state senate, Mellie was blackmailed by Rowan into giving him the names of the members of the grand jury set to take down B613. He then, in turn, forced Huck into murdering every single member of the jury and destroyed all evidence of B613. And afterward, Papa Pope walked away as Eli Pope, a free and clear man. And all thanks to Mellie.

Now, to be fair, she probably didn't know exactly what she was doing, but the damage is done by now. So in the Season 5 Episode 20 promo, when we see Rowan offering Abby a folder that "will crush Mellie," we can't help but assume that some of what he has on her has got to do with the jury scandal. Yes, he was involved in that himself, but come on. He's always going to be Command. If any part of his name is anywhere near that, he's got it covered up. And probably, just threatening Mellie may do the trick to scare her. Then again, she does have Olivia in her corner and Liv is the right kind of bad ass to compete with Command.

Then, there is the fixed election that could also implicate Olivia, taking them both down in a two-fer. You remember the whole election rigging thing, right? The whole reason Fitz was even elected the first time. It was a secret between Olivia, Mellie, and Cyrus, as they had the voting machines in an Ohio county rigged to make sure he gained enough votes. So really, Rowan's dirt on Mellie doesn't have to be limited to just one dirty deed.