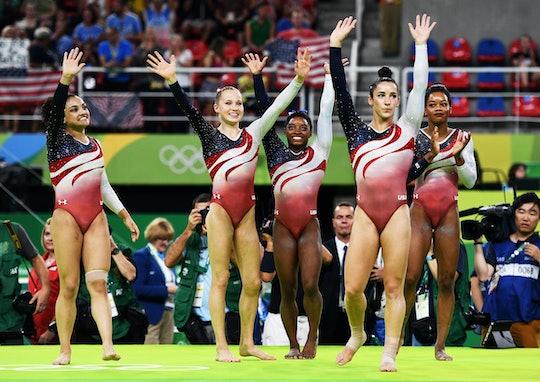 What Does The Final 5 Mean? The 2016 Women’s Gymnastics Team Name Is Pretty Symbolic

And the crowd goes wild! On August 9, the U.S. women's gymnastic team competed in the Olympic team finals. . . and took home the gold medal. As fans cheered — both in the Rio Olympic Arena and at home on the couch — the women that made up the 2016 Olympic team gathered to celebrate. During their first moments post-victory, the team shouted "Final Five," leading many to wonder what does the "Final Five" mean?

Not to be confused with the NCAA's Final Four, the Final Five is official team name for the U.S. women's gymnastics team. Though many have been referring to the team — made up of Simone Biles, Aly Raisman, Gabby Douglas, Laurie Hernandez, and Madison Kocian — as the Fab Five (or, in some cases, Simone Biles & Co.), the women set the record straight after winning the team final competition with a score of 184.897, according to CNN. The tradition of team nicknames dates back to the 1996 Atlanta Olympics, when the gold-medal winning team of Shannon Miller, Dominique Moceanu, Dominique Dawes, Kerri Strug, Amy Chow, Amanda Borden, and Jaycie Phelps were dubbed "The Magnificent Seven." Though team nicknames faded away after that, it was brought back at the 2012 London Olympics when Aly Raisman, Gabby Douglas, McKayla Maroney, Kyla Ross, and Jordyn Wieber took home gold and earned the title "The Fierce Five."

So we get why the gold medal-winning team gave themselves a nickname. But why that nickname in particular?

Some in the gymnastics know may think the team took on this nickname because 2016 is the last Olympic games where a gymnastics team will be made up of five members. Sports Illustrated reported that, beginning in 2020, gymnastics teams will be made of four members. This rule will apply to both the men's and women's teams. Steve Butcher, the FIG men's technical committee president, confirmed the ruling on Facebook in May 2015 writing:

...The team format will be four gymnasts, four compete on each apparatus, and three scores count. The best countries will be able to qualify up to two individual gymnasts also through World Cups, Challenge Cups, and Continental Championships. There are many other formulas for AA gymnasts to qualify outside of the teams. The final details are still to be worked out, but the format is now set.

Although that is a very well-researched theory, it's not the reason. According to The Las Vegas Sun and The Daily Dismount podcast, the name, "The Final Five" was chosen to honor Marta Karolyi, the national team coordinator for USA Gymnastics. Earlier this month, The Washington Post reported that Karolyi announced that she'd be retiring form the role after the 2016 Rio Olympics. Daily Dismount reporter Tanith White confirmed the news on her podcast following the victory saying that the team, "chose this name because this is, allegedly, this is the final Olympic Games where the U.S. women’s gymnastics team will be led by women’s national team coordinator, Marta Karolyi.

Karolyi has, without a doubt, made U.S. Gymnastics what it is today. Following her husband Bella's retirement, she took over the role of Women’s National Team Coordinator in 2001. According to the official U.S. Gymnastics website, Karolyi followed many of her husband's practices, but added a little more compassion into the mix. The site noted that, under her reign, the women's gymnastics team won a combined total of 24 medals in World Championship and Olympic competitions. Well, make that 25 and counting.

Though it is unclear whether Karolyi will stay involved in gymnastics in some capacity, it's clear that a gold medal and a team name in her honor is a nice way to exit the game. Don't you think?