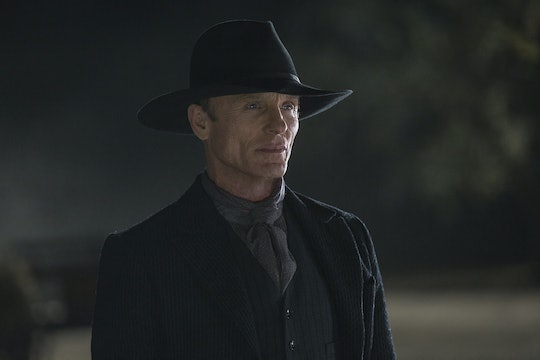 What Does The Milk Mean on 'Westworld'? It's Another Running Theme That Has Fans Guessing

There has only been one episode so far of Westworld on HBO, but already, viewers are asking questions. About the androids themselves, the amusement park of Westworld, the human guests, and creators up in their futuristic lab. There are no shortage of questions about the show overall, but it's all in the name of trying to figure out exactly what is going on and where it will lead us. Like, what does the milk mean on Westworld?

Twice in one episode, we saw milk being used by a bandit. Once at the Abernathy farm, where Dolores's parents were murdered and the bandits were drinking the milk they'd found in the house before pouring it on her father's body. And then again in the saloon, where the android malfunctioned and took a few swigs before it poured out of the bullet holes in his body.

So what does the milk mean on Westworld? are we missing some bigger picture, or is there still too much to unfold that we're all learning at the right pace? The latter is probably true, but that doesn't mean that we can't speculate tenfold about what the milk means and why the bad guy hosts are using it in their shooting and robbery scenarios.

The Milk Keeps Them Going

While we've seen some of the hosts drinking in the saloon, we have to assume that they don't actually need any kind of food or drink to survive, since they're robots. But the milk that seems to be everywhere might be the one thing they do need, like a sort of liquefied battery that keeps them going and gives them a pick me up to last the day and night until they power down to be reset the next day.

The Abernathy family seemed to keep only milk in their refrigerator in their farmhouse, which could just be part of the set of the park, or it could be because the androids actually thrive on whatever milky white substance it really is.

It Is The Same Liquid They're "Born" In

Right after we see the bandit pour milk into the mouth of a fallen host, the show cuts to a scene in the lab, where we see the artificial muscles and tissue of a new android emerging from what looks to be a large vat of milk.

It's probably not a tub full of several gallons of thick whole milk, but the appearance is exactly the same, which makes you wonder how the milk and the liquid that the androids are "born" in connect, because they obviously do.

It Symbolizes Androids Malfunctioning In A Different Way

If we are to link the jugs of milk to the milk bath the android bodies are "born" in, then this means that the bandit host who keeps using milk on his host victims subconsciously remembers the milk bath his body underwent before becoming programmed. The whole idea behind the questioning that Dolores undergoes every night while she "sleeps", is to make sure that she isn't self-aware and that she's still blind to the truth of the park.

But then she subconsciously smacks the fly on her neck, hurting a living thing in the process, and showing us that she is malfunctioning in a big way. The bandit host might be subconsciously remembering the way he and the other androids were "born" in the white liquid, and could be equating that to the milk he is starting to make a habit of pouring over his victims and then drinking himself.

It Goes With A Running Theme Of White Among The Hosts

If you go to the Discover Westworld website, you are able to chat with the host boy, Aeden, who will eventually tell you, "Upon arrival at Westworld, you’ll choose a hat to wear inside the park that embodies how you intend to play it inside. Which looks better on you?" Then, you'll have the option of choosing either a black hat or a white hat. So far, most of the bandit hosts have black hats, but Teddy (James Marsden) has a brown hat and at one point, a guest takes the black hat of a bandit he'd shot and killed.

But there is also a lot of white, or possibly, good, in the show. Every morning when Dolores wakes up, she's wearing white. The entire inner makeup of the androids is white instead of red, like that of humans. Maybe the hosts are inherently good and meant to be that way, but their programming of being criminals or even evil screws with it so much that it aids in making them go haywire, as we've begun to see?

Then again, the milk could just be part of the bandit's story line of creepiness that he has inadvertently been playing on a loop or in the wrong order, given that regardless, he is still malfunctioning. The milk on Westworld is just another of the many mysteries we're likely going to see play out in the first season, but hopefully with some more clear cut information as time goes on.