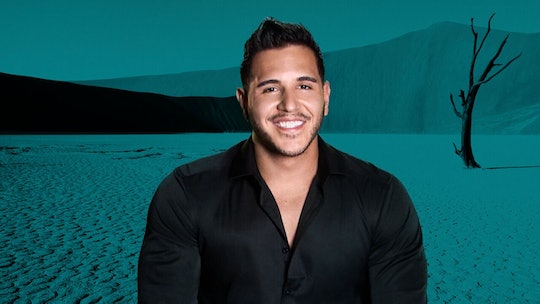 The Challenge: War of the Worlds is off to an unexpected start. First, two contestants were sent home after losing the first competition. Then, the prospects were given the task of choosing vets for their partners instead of the other way around. And at the end of the premiere, it was revealed that during that first competition, Alan injured his arm, so he was cut from the show early. It was definitely unexpected though, which no doubt has fans wondering what happened to Alan’s arm on The Challenge and how long he’ll be out this season.

According to host T.J., he broke his arm and because it was such a serious injury, he had to leave the game early. Judging by the audible gasps from the rest of the cast, this came as a big shock to them, despite seeing Alan’s bandaged arm all evening. Alan himself didn't take the news well, especially since it was at the beginning of the game.

"I’m just so devastated," he said through tears, after being eliminated. "But I tried my best." To be fair, that first competition was a doozy. The competitors had to run down a steep sandy hill in the dessert with heavy medicine balls flying around their feet, get to their sacks of sharp puzzle pieces, and make it down the hill in time to put the puzzles together without coming in last place and being eliminated. I can see how Alan would inadvertently break his arm in the process, but after winning that intense first comp of the season, it was probably hard to say goodbye so early.

At one point in that first competition, Alan was seen falling at the foot of the hill, after which he got right up. He said on the show that although he didn't feel the pain at the time, he did see an open wound on his hand. "With the adrenaline, and trying to be focused, I just tried to finish as fast as possible," he explained. He didn't come in first or even second place, but he managed to put that puzzle together with an apparently broken and bloody arm. It’s understandable that a broken arm sent Alan home on The Challenge, though, because I can’t see how he would be able to compete the rest of the season with such a serious injury.

Although he hasn't talked about his injury on social media, Alan did post on Instagram about a previous injury to the same arm from a year before he got hurt on The Challenge. In the post, he said that doctors told him he would never be able to exercise again, but if he came back from that, I’m sure it was relatively easy for him to recover after getting injured on The Challenge.

Unlike the other cast members this season, Alan wasn't from a previous season of The Challenge or any dating or physical competition reality show. He’s actually a model and actor who has worked on commercials and in telenovelas, so competing on The Challenge: War of the Worlds was a new experience for him. Not only was he thrown into a competitive atmosphere with tons of alpha males, but he had to put all of his energy into an expected first competition wherein his future on the season relied on it.

Despite working hard right off the bat, Alan’s injury was too serious for producers to allow him to continue competing this season. Thanks to his early elimination, however, Josh was able to come back into the game for a second chance at proving himself. Hopefully Josh’s second chance will mean Alan’s injury and losing his own shot at the $1 million prize wasn't for nothing. OK, let's be honest — nothing will be worth losing a chance at winning that money, but throwing in the towel early was best for Alan’s health.