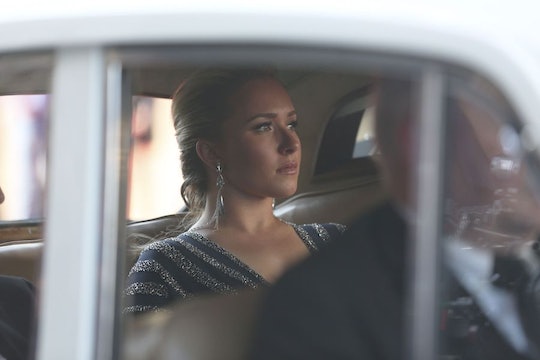 What Happened To Juliette's Plane On 'Nashville'? We May Never Know

Well, we were promised a major cliffhanger ending for the Season 4 finale of Nashville and we got it. On her way back from the Oscars, Juliette's plane mysteriously disappears over the city. So what happened to Juliette's plane on Nashville? Let's back up a second.

First of all, Juliette is in Los Angeles attending the Oscars, where she's nominated for her role in the Patsy Cline biopic Shenandoah Girl. She doesn't end up winning, but that's sort of the least of her worries when news breaks that she may have been involved in Jeff Fordham's death. Instead of quietly negotiating a settlement with Jeff's sister, who has begun investigating the incident and wants to sue Juliette for wrongful death, the country star just gives Jeff's sister the money she's asking for, and decides to come clean about the whole thing in an interview at the Oscars.

She admits that Jeff was on the roof on the night of his death to stop her from killing herself, and, in the fracas, he wound up going over the edge. She also brings up that she was too drunk and high at the time to even remember the incident, but once she did, she immediately checked herself into rehab and took a break from the spotlight.

After she finishes telling her story, Juliette talks to Avery on the phone, who basically promises her that he and Cadence are waiting for her. (It seems like he has some residual guilt because Juliette tried to commit suicide on a night they had a fight.) She promptly gets back on a plane to Nashville before the awards ceremony is even over, and we briefly see her hanging out in PJs on the plane. But once Avery gets to the airport and is waiting out on the tarmac for Juliette's private jet to arrive, he hears some disturbing news from airport personnel:

And that's where the episode ends! So we know Juliette got on a plane, and we know that she was safe and sound on the plane for at least part of her flight. But then the airport loses contact with the captain just outside of Nashville. Where could her plane have gone? The midwest is not exactly the middle of an ocean. Most places a plane would go down would be seen or heard by people down on the ground, unless she went down in a particularly expansive cornfield.

For their part, the production company behind Nashville seems to be promising viewers that they will wrap up this storyline one way or another. They're currently shopping the series to places like Hulu, CMT, and DirecTV to potentially pick it up for Season 5, so we can all learn Juliette's fate. For Nashville fans' sake, we hope they succeed. Otherwise, this is one of the most egregious series finale cliffhangers in recent memory.