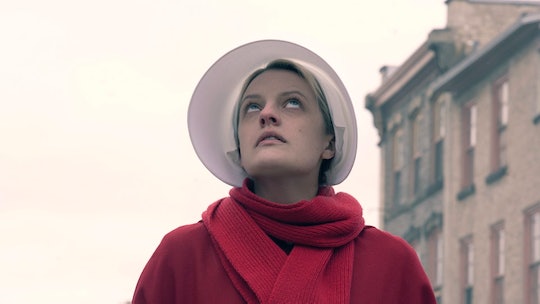 June (Elisabeth Moss) went through hell and back in Season 3 of The Handmaid’s Tale. The finale presented a new set of problems for her to overcome and when she did, things went smoothly for once, for a little while. Then, the season ended on a cliffhanger which left viewers wondering what happened to June on The Handmaid’s Tale.

After June, some of the other handmaids, and some Marthas stoned the guards at the landing strip, June made a run to distract the remaining Guardian and ended up getting shot. You had to expect June would get severely hurt at some point, especially the way she spent Season 3 with minimal consequences for some of her more drastic actions. She did, however, make it deep into the woods before the guard caught up to her.

The season finale ended with an air of hope followed by questions about how June will return for Season 4. She has been through a lot, but even June’s plot armor isn’t thick enough to keep her safe from a shot to the abdomen. She was being carried out of the woods at the end of the Season 3 finale, but realistically speaking, her chances of survival are questionable and it’s not clear where the handmaids took her.

Despite suffering a bullet wound herself, June shot and killed the Guardian. Only then did she allow herself to lay back and watch the plane fly overhead with the children and Marthas who she helped to escape Gilead. June was ready to die after a job well done, but at the break of day, a group of handmaids found her and gathered her up to carry her out of the woods. Since she wasn't dead, it was the first sign that June will live to continue her mission in Season 4.

June’s fight is still far from over. She was likely taken somewhere safe by the handmaids rather than back to the throes of Gilead. The latter is a fate worse than death, especially since it would be obvious to the authorities that June had a role in getting all of those kids out of Gilead.

June might still be presumed dead in Season 4. If she "died" for the resistance and the word gets out, Gilead will have made a martyr out of her, even if she is still secretly alive. She pointed out earlier in Season 3 that she had to stay alive and well for the Waterfords’ propaganda films. She was slowly becoming a public figure.

Aunt Lydia even pointed out in the Season 3 finale how the other handmaids look up to her. Allowing June to die in a sense but remain working for Mayday underground could inspire real change and a clear uprising in the next couple of seasons.

The Handmaid’s Tale showrunner Bruce Miller pointed out to Vanity Fair how the show is June’s story from her point of view. This gives her an unavoidable shield in terms of being killed off.

"This story only exists as long as June was alive to live it and write it down," he said. "So I think that June is our guide. When June dies, our guide dies, and our show dies." He also said there are "absolutely" going to be more consequences to June getting dozens of children out of Gilead other than just getting shot.

June will survive after being carried out of the woods by the other handmaids, but she won’t return to life as a handmaid herself. It would be too repetitive at this point, so instead, June might go fully underground to work with the resistance. If The Handmaid’s Tale is her story from her perspective, then June isn't going anywhere. But she could be finished with that life and on to something bigger in Season 4.

The Handmaid’s Tale airs on Wednesdays on Hulu.

More Like This
'Virgin River' Has Wrapped Filming Season 5 & OMG Is Charmaine Still Pregnant!?
20 Heartwarming Episodes To Help Prepare Your Child For A New Sibling
Rubble From 'PAW Patrol' Is Getting His Own Spinoff Series Full Of "Messy Demolition"
Here’s How To Watch Every 'Modern Family' Thanksgiving Episode