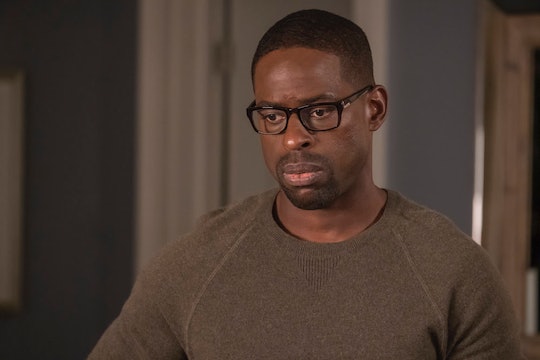 Randall's Mom Has A Tragic Past On 'This Is Us'

For every moment of happiness and bliss on This Us, there are many more moments of heartache to bring the feels from viewers everywhere. And so many things about Randall's past definitely tug at the heart strings, including what happened to Randall's mom on This Is Us. His biological mother, much like his birth father William, had a tragic past, and as fans found out back in Season 1's pilot episode, she died early on.

In a conversation Randall had with William about his own birth and why he was left at the fire station, William revealed that Randall's birth mother died, presumably during childbirth and that he couldn't take care of a newborn on his own, which led to him leaving Randall in front of a fire station door in the hopes that his son would be given to a family who could take care of him.

Although he didn’t outright say that his mom died during childbirth, William did tell Randall, "I’d like to say I remember the day but I barely do. I’m clean now finally, but I was on the streets then. I remember her dying, your mom. I remember the baby." So either way, it would seem that what happened to Randall’s mom was yet another big story from before the Big Three were even born.

Of course Randall didn't know any of this growing up and as a kid, he clearly longed to know more about his birth parents and blood relatives, as evidenced by when he asked a couple at the grocery store if they could roll their tongues like him. And then even as a teenager, Randall's need to seek out his roots only continued to grow.

In Season 2's episode "Déjà Vu", Randall took out a personal ad in the newspaper and set out to meet a woman who he believed to be his birth mother. As Kate and Kevin stood from a distance to watch him for moral support, Randall's faux birth mother approached him on the park bench. But since fans have already seen his mother in William's flashbacks, it was immediately clear that this woman wasn't who Randall was looking for. In fact, she apparently used Randall's ad to accost him for money.

I don't know if that scam worked for her in the past, but luckily Randall was smart enough to know he'd made a mistake and left the park, clearly brokenhearted. Although Randall's biological mother died a long time ago, there's still a lot the writers could do with her story on the show with the help of a few more flashbacks.

There was that unforgettable montage at the beginning of the series that showed how William met Randall’s mom on the bus and how she seemed to inspire his poetry, as well as their eventual relationship and then shared drug addiction. But since William cared enough for baby Randall to take him to a fire station and stick around the hospital to watch Rebecca and Jack take him home, then it's possible Randall's birth mother also cared for her unborn child in unsuspecting ways. Perhaps one day we'll get a flashback of when she was pregnant with Randall and see how she was dealing with the idea of becoming a mother.

Regardless, Randall's mom is as much a part of him as William was and although she died giving birth to him, there's still a lot of that story to tell.