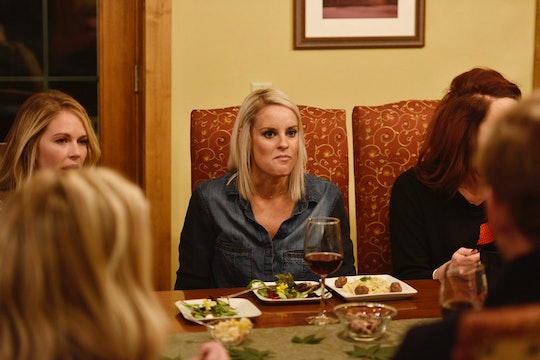 Something Went Down Between Shep & Danni On 'Southern Charm'

What happens in Colorado, stays in Colorado. Unless you are the cast of Southern Charm and you take your friendship and relationship baggage with you everywhere you go. The majority of the cast is still on their pot-fueled vacation in Colorado and in between attempting to ski and dipping in hot springs, there is plenty of new drama to go around. But whatever happened with Shep and Danni on Southern Charm could just be history repeating itself.

Shep has been strongly against Madison and Austen’s relationship from the get go and whether it is because of jealousy over wanting to date Madison himself or jealousy over losing time with his friend, it hasn't been a good look for him. Either way, Shep’s interference and general bad attitude when it comes to Madison and Austen is getting in the way of their relationship and now, it is affecting the group’s vacation.

In the preview for Wednesday’s episode, Madison and Shep are arguing yet again and she appears to drop some kind of bomb that sends waves through the house. The next scene in the preview shows Danni crying outside and wondering why Austen would "even say that" about her. It’s unclear what Madison told Shep, but it sounds like it has to do with both Shep and Danni and the drama just leveled up.

In a clip from Wednesday’s episode that was posted on Bravo’s website, Madison tells Kathryn that Shep "wanted to talk facts," so she did and it set off Danni. It’s at this moment when Danni comes in the room and tells Madison, "You truly don't know what you’re talking about." Although the preview and sneak peaks have left the juiciest parts of the fight up for interpretation until the episode airs, it sounds like it has to do with Danni and Shep revisiting their past together.

Although Shep is considered to be Southern Charm’s resident bachelor and even had his own dating show back in 2017, aptly titled RelationShep, he dated Danni before Southern Charm was even a thing. Season 1 of the show alluded to this and because they have a past together, it would make sense if they recently hooked up and Madison knew enough about it to bust out a truth bomb on him during their fight. Since Madison is dating Shep’s best friend, who Shep would be mostly likely to confide in if there was a secret hookup, Madison would probably know what she’s talking about even if Shep had no idea Austen would have such loose lips.

However, since no one from the cast has come forward to confirm as much right now, it’s all speculation. It is the most logical explanation, though, for why Danni is so upset in the preview and why Madison seems almost giddy to have a secret about Shep to hold over his head before she lets it out and all hell breaks loose. It also wouldn't be surprising because of Shep’s poor track record with women in general.

Depending on when Southern Charm Season 6 was filmed, it could have been hot off the heels of Danni’s 2018 breakup then then-fiancé Todd Baldree. At the time, she told The Daily Dish she was going to focus on her career for a while rather than jump back into dating. It’s possible she gave in to the moment with Shep, her ex, and they hooked up. Right now, it’s the only logical explanation for whatever tea Madison has about Shep that shook Danni so much. Hopefully, they can hash things out before the Southern Charm Colorado trip is a total waste.