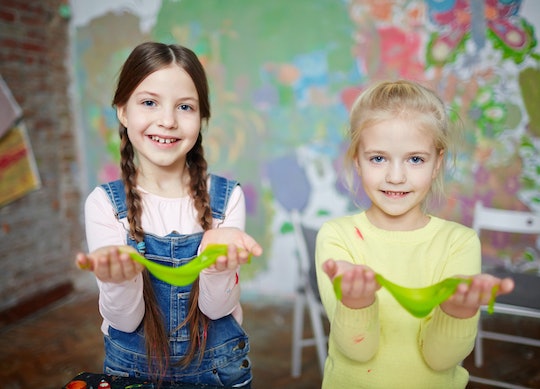 Here's What Happens If Your Kid Eats Slime, Because... They Might

Kids love anything messy, squishy, and goopy, so it's no surprise that homemade slime is a fad. However, plenty of kids take hands-on learning to the next level by eating random stuff, DIY science experiments included. So what happens if your kid eats slime?

First, contact an expert to determine the risks of your particular batch of slime. “If you think your child has eaten slime, you can call a Poison Control Center at 1-800-222-1222,” Dr. Anupam Kharbanda, Chief of Critical Care Services at Children's Minnesota, tells Romper. Calls are toll-free, and experts are available around the clock. “If possible, have the slime recipe with you so you know the quantities of each that was used.”

Some slime ingredients may pose more of an issue than others. “Glue, contact solution, borax... they are potentially harmful if eaten in large quantities,” Natasha Burgert, M.D., a pediatrician who writes at KCKidsDoc, tells Romper via email.

Indeed, the amount ingested matters a lot. “In medical toxicology, we say that ‘the dose determines the poison.' Small quantities of certain slime formulations may be relatively nontoxic and require no additional treatment,” Kelly Johnson-Arbor, M.D., board-certified medical toxicologist and the co-medical director of National Capital Poison Center, tells Romper.

“However, larger quantities of slime (depending on the ingredients) may cause nausea, vomiting, stomach aches, diarrhea, or other serious symptoms.” With this in mind, it’s best to err on the side of caution and contact the Poison Control Center or your pediatrician at once, especially because there have been reports of children who experienced issues after playing with slime. In fact, an 11-year-old girl wound up in the hospital with severe burns after making homemade slime, as reported by CBS Philly. As it turns out, she experienced a blistering reaction to borax, a common ingredient in many DIY slime recipes.

However, the chance of your child eating slime and experiencing serious health problems is somewhat small. “At Children’s Minnesota, we have never seen this in our emergency department,” says Dr. Kharbanda. “A child would have to consume a large amount of slime to experience a serious reaction.” And there’s also the flavor factor. “I mean, it tastes gross. Ingesting the amount of slime that causes serious toxicity would only occur in the most determined child,” says Dr. Burgert.

That said, you know your kid best. So if this is making you rethink the slime fad altogether, then there are other options, including many safe alternatives to slime that don't include borax. Some of these recipes are even edible, which is the perfect option if your kid is a habitual taste tester. Your family can still enjoy non-Newtonian fluids in a fun, safe way.

Natasha Burgert, MD, FAAP is a pediatrician in South Overland Park, Kansas who writes at kckiddoc.com

This article was originally published on April 5, 2017