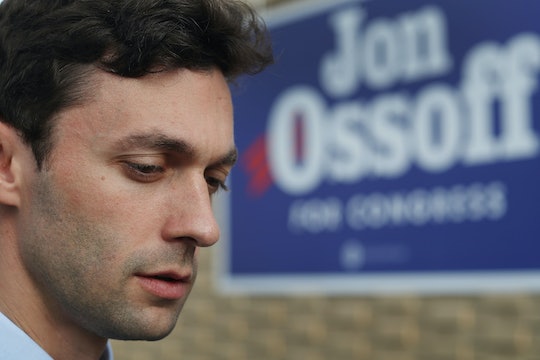 What If Jon Ossoff Can't Win A Majority?

A special election in Georgia's 6th district has gained national attention as voters head to the polls on Tuesday. The special election was called to fill the vacancy left by former Rep. Tom Price, who was President Trump's pick for Health and Human Services Secretary. While polls show Democrat and political rookie Jon Ossloff in the lead, it's still a very wide field, with a total of 18 candidates on the ballot for Georgia's 6th. In order for a clear winner to be determined, one of those 18 candidates must secure at least 50 percent of the vote. What happens if no candidate wins the majority in Georgia's special election? The special election would head to a runoff election later in June, where the top two candidates with the most votes would face off against each other.

While Democrats are fired up about Ossoff, there's a very real possibility that the 30-year-old documentary filmmaker and rising Democratic star might not have the votes to secure a majority vote on Tuesday. According to FiveThirtyEight, several polls show Ossoff doesn't yet have a majority. He's come pretty close, with a 42 percent average across the last nine polls that FiveThirtyEight included in its aggregate analysis. While that number jumps to 46 percent when you factor in undecided voters, neither average puts Ossoff at the majority he needs to secure a victory on Tuesday.

All eyes are on Georgia's special election Tuesday, in a race that has the GOP concerned — so much so that even President Trump is scared of Georgia's special election and recorded a last-minute robocall attacking Ossoff. According to CNN, Trump told voters in the recording, "Only you can stop the super liberal Democrats and Nancy Pelosi's group, and in particular, Jon Ossoff." The robocall recording continued, "If you don't vote tomorrow, Ossoff will raise your taxes, destroy your health care and flood our country with illegal immigrants."

While it might not seem like a small congressional special election could have such big implications, that's not how the Democratic Party sees Tuesday's special election at all. If anything, Georgia's special election — and in particular, Ossoff's candidacy — has become a driving force for "the resistance," with many voters calling it a referendum on Trump. Campaign finance filings revealed that a whopping 95 percent of donations to Ossoff's campaign came from outside the state of Georgia, according to The Atlanta Journal-Constitution earlier this month.

If Ossoff can't win a majority vote in Tuesday's special election, it could spell major problems for Democrats in the long run. Ossoff could lose a runoff election further down the road, despite his rising popularity and donor dollars right now. There's more than enough time for the GOP to rally its donor base and throw its own campaign machine behind whoever would face off against Ossoff.

If anything, a runoff election in Georgia's 6th could very well be the Democratic Party's undoing in its movement to retake Congress in 2018. That's what makes Georgia's special election so important and vital for both Democrats and Republicans. There really is a lot at stake here.

Polls in Georgia's 6th district close at 7 p.m. Eastern Time on Tuesday — and the whole country will be watching as the results come in.