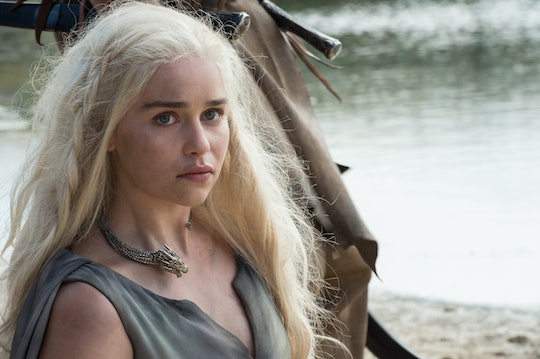 What Happens To Khaleesi At Vaes Dothrak? They Never Leave

When we saw the hundreds of Dothraki circling Daenerys at the end of Season 5 of Game of Thrones, there was a battle of mixed emotions. On one hand, their mere presence reminded us of the lose and beloved Khal Drogo. On the other hand, in a way, they are savages. And now we find out that Dany's "rightful" place as a former khaleesi is basically shut away. So, what happens to khaleesi at Vaes Dothrak? Nothing good, because they are meant to live out their days there. Which is a pretty far cry from seeing Daenerys on her many adventures in trying to gain her spot on the Iron Throne. And, you know, just hanging around boring old Meereen for far too long.

Although Vaes Dothrak sounds like a random place they've suddenly stuck somewhere within the Seven Kingdoms, we've actually seen it before, way back in Season 1 when Dany performed the heart-heating ritual and her brother was honored with "a crown for a king". You know the scenes. Then, it was known to us that blood cannot be spilled in the Dothraki capital, which at least means that it is a somewhat peaceful place for khaleesi widows to live out their days together. But, as we all know, Dany did no such thing when she became a widow herself. Then again, who can blame her, with three baby dragons to care for and a throne to take over, right?

Daenerys has proven herself time and again how strong and adaptable she is, so there's no reason she won't get out of her current mess quickly, especially since we've got Drogon flying around keeping tabs on her. But it could be that Dany's reconnection with the Dothraki people is what she needs to go back to her roots of taking over the Iron Throne. At the beginning of Game of Thrones, her marriage to Khal Drogo was all about gaining the Dothraki army for just that. Then, somewhere along the way, she found it necessary to stay in Meereen and become queen to people who never wanted their awful customs to change anyway.

I can't imagine that, should we see if Daenerys will go to Vaes Dothrak, she would even stay there, but it does bring her back to almost the beginning of her story as we know it. That is, if she even goes. Something tells me that she will somehow charm or otherwise convince Khal Moro to let her go or back her claim to the throne. Khal Drogo he is not, but he clearly has some sort of respect for her as it now stands.