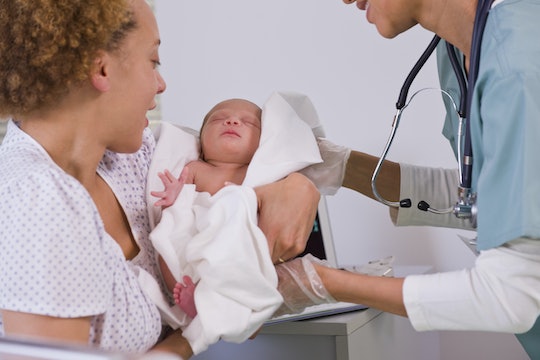 Here's How Your Brain Changes After Giving Birth

There are more than enough changes happening to your body when you have a baby, but what happens to your brain after giving birth may be the most surprising. I mean, you probably knew that stretchmarks could happen and that your breasts were going to become geysers of milk. But who expects that pregnancy will rewire brain after you've delivered your baby?

According to Scientific American, a research team at Autonomous University of Barcelona found significant gray matter changes in regions of the brain associated with social cognition and theory of mind in new mothers up to two years after giving birth. It sounds strange, but when you think about it, the information shouldn't be too much of a shock. The changes are compared to the changes that people go through at another time in their life — puberty. Scientific American noted that puberty is the only other time when your body produces such large quantities of progesterone and estrogen, and these hormones have been known to cause dramatic structural and organizational changes in the brain.

Some of these changes are happening before your baby is even born. According to The Atlantic, during pregnancy, gray matter becomes more concentrated and activity increases in the brain regions that control empathy, anxiety, and social interaction. But the reason for all these changes sounds pretty simple when you realize that it's all to help you become attracted to your baby and bond with them, making those maternal feelings present in the brain first

So what about that mommy brain phenomenon? Is that all due to your hormones, too, or is it a totally made up way of justifying that you've lost your glasses again? Fit Pregnancy noted that the fogginess surrounding new motherhood can last for up to a year, but doctors aren't convinced it's just a brain issue — it could be sleep deprivation. And with sleep deprivation comes a whole different list of things that are happening to your brain, like not being able to regulate your feelings, losing brain cells, and even having your brain shrink.

If the thought of your brain losing grey matter and firing up neurons in areas that haven't been as utilized before makes you panic, don't. Scientific American noted that this is entirely an evolutionary idea. Now that you have a baby, you're going to have different problems to solve, different priorities, and different tasks, so of course your brain is going to re-wire to fit them all in. Even if it means carving out a chunk of your brain that used to hold your memory and replacing it with all of the Paw Patrol characters.