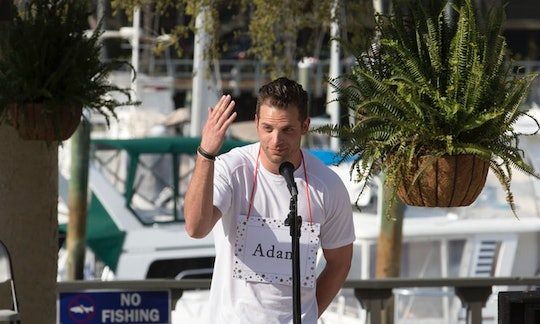 Adam Has Been Keeping Busy Prior To 'Bachelor In Paradise'

Even if they don’t mean to, when Bachelor Nation contestants agree to compete on one of the shows, they become members of the Bachelor culture. But since that culture involves being paid to party and making friends, you can definitely sign me up. Even for contestants like Adam Gottschalk — father to his creepy doll Adam Jr. — becoming part of Bachelor Nation means engrossing yourself in that lifestyle. So what has Adam been up to after Rachel’s season of The Bachelorette? Thanks to his business ventures and participating in Bachelor Nation events, he’s been keeping pretty busy.

For most of June, he was filming Season 4 of Bachelor in Paradise, which he’ll soon appear in. But he’s also been busy flying his private plane (yes, private) and working hard at STRIVE Realty. Recently, he posted a photo of himself flying his private plane and apparently scouting properties for the company, so aside from potentially wooing women this season on Bachelor in Paradise, Adam is still working hard at his career.

According to Adam’s LinkedIn profile, his position at STRIVE Reality involves focusing "exclusively on retail investment sales, including both single-tenant and multi-tenant properties throughout Texas." He was also named one of D Magazine’s Dallas power brokers back in 2016, so yeah, he’s kind of a big deal.

Additionally, he's been using his money and position for good. At the end of May, Adam posted a photo on Instagram with a group of youth basketball players from his hometown of Dallas and wrote how he was inspired by the basketball date on The Bachelorette to gift the whole team with new shoes.

Adam has also been super supportive of the other men of Rachel’s Bachelorette season and has been quick to post encouraging words for them on social media and regularly send out positive tweets. Even if he didn’t make it to the final four, Adam was still able to make some lasting friendships on The Bachelorette, and that’s almost just as good, right?

Not only is Adam going to be part of Bachelor in Paradise this season, but he also accompanied Bachelor Nation favorites Raven Gates, Jasmine Goode, and Alexis Waters, among others, on the recent trip to Punta Cana to celebrate Rachel’s engagement to Bryan Abasolo. Despite continuing to work hard as a real estate broker, Adam is still keeping his schedule open to entertain enough Bachelor Nation events to stay close to the friends he’s made. And it definitely makes me excited to see how he does with finding love this time around on Paradise.