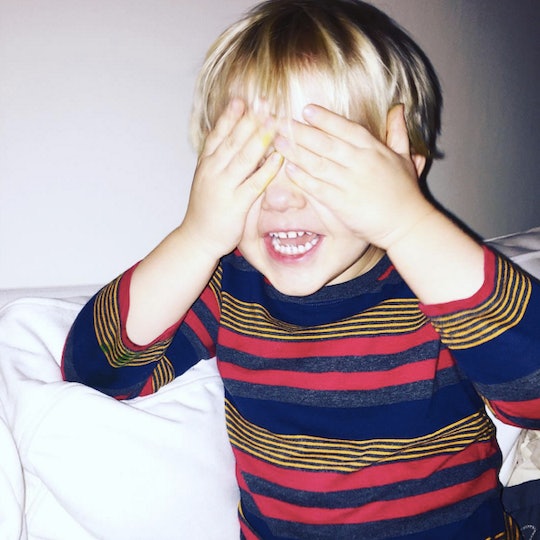 When I was pregnant, and throughout the first months of my son's life, I held up the age of three as this magical finish line. I thought I knew, long before I had one of my own, what 3-year-olds are like. In hindsight, I realize this perception was based on... I don't know... half-information from parents I knew, and the fact that I didn't know of any pithy, alliterative labels like "Terrible Twos" for 3-year-olds, so clearly they must be fine. After all, if we haven't come up with a catchy code name for the particular kind of hell inflicted by kids of a specific age, then that must mean that age is a breeze, right? We, the parents of the world, have an unspoken agreement to warn one another of choppy seas ahead by labeling that part of the map with a memorable name, easily remembered during the sleep-deprived buildup to encountering it?

This is what I assumed was our deal, guys. I hadn't heard anything special about three the way I'd heard about the mythically horrific shitshow that is 2 years old, which lead me to (reasonably, I believed) to think that three was just, ya know...a year, wherein I would experience some challenges, sure — kids are still kids, etc. — but largely, it was an unremarkable year. And thank god, because after pregnancy, then having an exhausting newborn, a dizzyingly developing one-year-old, and a spirit-crushing 2-year-old, all back-to-back, all I wanted in the world was an unremarkable year with my kid. Like, can we just chill for a minute? Yes, we can, and 3 years old is when we're gonna do it.

This, friends, is the beautiful lie I told myself. I assured myself during every hard day for my kid's first few years that all I had to do was make it to age three and then the obstacles would become smaller, and the communication/developmental gap, once cavernous and insurmountably wide, would feel more easily navigable. We could finally start to relate to one another, at least on some rudimentary level, as two mostly formed human beings (as opposed to him being a lumpy, confusing, non-verbal, water balloon of neediness, and me being disinterested in spending any more of my life than necessarily trying not to break the lumpy, confusing, non-verbal, water balloon of neediness).

Anyway, you know where this is going: It was all a lie. Three is bullshit. It's worse than two. It's worse than two. Maybe four gets better. I dare not buy into that glittering dream. I'm sure 4-year-olds are hard in their own unique way that my mind isn't even dark enough to independently fathom. Because, as it turns out, kids are really just people and people never stop being the worst. We're pretty much the worst until the end of our lives. I love my son. So much. He makes me so happy. But also...he's the worst. And now, as he is 3 years old, I have finally realized why he's the worst: It's not because of his age, no matter what age he's been; It's because he's a person, and people are the worst. This is it, guys. Settle in.

Also, there is a loathsome term for 3-year-olds: threenager, and I don't need to explain it to you, because as I'm sure the sinking feeling in the pit of your soul is telling you, you already understand what it meant.

And if you want to escape the unending tedium that is living with another horrible human being, day in and day out, here's a glimpse into the depths of the beast you know (or are about to know) too well. If nothing else, it's another five minutes on your phone before facing reality again.

We would finally be able to have more interesting conversations. By three, my kid would have a more thoroughly developed vocabulary, a more nuanced grasp on language and its usage, and the mental capacity for abstract and complex thought, all of which would come to fruitful use during our revelatory conversations as mother and son. I would impart knowledge; he would inspire me with youthful, back-to-basics perspective and remind me the ultimate truths I'd long forgotten with his fresh, "this is the first time I've ever considered this" view of things.

He is definitely capable of all of that. That exact kind of exchange happens for exactly, like, seven minutes per week. The rest of the time, he's asking me "why?" about unknowable things like "why is red" (I know, that's not even a question), usually while he's sitting on the toilet, forcing me to answer him while he poops.

At the very least, by age three, he will be able to sit at a table for a whole meal and use a spoon and fork with minimal damage to the surrounding area. It won't be perfect, but like, a hell of a lot better than it used to be. Maybe not fully self-sufficient, but very nearly.

Oh yeah, he can totally do all of that. Is he going to, though? Absolutely fucking not. He would like to be fed, if you don't mind (and you better not, or else...)

OK, so I thought that aside from the aforementioned "being humans so inherently sucking most of the time" thing, kids mostly had meltdowns as a result of still being confined within the infuriating limits of underdeveloped communication skills. Like, 2-year-olds are stuck in an awful limbo of thinking more complex thoughts and being more conscious of their needs, but still not having a broad enough range of communication skills to fully communicate them, plus having absolutely no emotional management skills, and thus...freakouts. I understood that. But by three, most kids are far more proficient at communicating, thereby alleviating the unresolved urgency that lead to meltdowns when they were 2. More words = fewer tantrums.

Sure, all of that is fine, but by three, there's a brand new reason to lose their shit, and it's not because they are unable to express what they want: it's because they don't have absolute and total goddamn control over getting what they want every second of every day. It's one thing to endure a (totally understandable, if still maddening) 45-minute meltdown because your toddler can't make themselves understood to you, but dear god, it's some other kind of fresh hell when suddenly your seemingly-way-too-old-for-this-shit 3-year-old is having the same 45-minutes meltdown over, like, not being allowed to climb onto the subway tracks.

The difference between 2-year-old meltdowns and 3-year-old meltdowns is basically the difference between "this awful thing is happening because I literally don't have the skills to handle my feelings in any other way" and "I'm choosing to do this to you, to spite you, because I hate you, and you are legally and biologically obligated to not tell me to fuck off, so deal with it."

Hurray! A more-mobile child with whom to do all kinds of slightly-more-grown-up things! Let's go to the big-kid playground, and those live theater shows where giant puppets will tell you to dance and blow your tiny mind while I secretly drink from a water bottle full of vodka-soda! Let's go to museums and learn things! You're three! The world is waiting for us, little friend!

Fighting for hours to get him dressed and out of the house on Saturday while he repeatedly insists he wants to watch Paw Patrol. Once finally out, Mr. Supposedly Potty Trained will have his first "accident" in weeks, which your over-confident ass will have totally failed to pack extra clothes in preparation for. The puppet songs will be stuck in your head for 11 numbing days straight.

This is only true on those rare days when you have nothing pressing to get done around the house, you're completely caught up on work emails, you're already miraculously showered and wearing clean clothes, and you actually want to play with your kid. That's when they'll be ready for a little time alone in their room to ~do them~. The rest of the time, they want to give you a minute-by-minute, annotated tour of their playtime choices: why the bulldozer goes here; what animal they're pretending to be and why that animal is wearing a tutu; what they're building with Legos and why it's whatever color it is; where the train is driving. Needing to show your kids how to become engaged in activities when they were younger has now turned into being shamelessly held as a captive audience member in their never-ending show.

By three, my kid would be sarcastic and funny and random and perpetually making me laugh/grossed out/confused/blown away by the original ways his speedily expanding grasp over the world around him is being synthesized and regurgitated and spit back out in the form of brilliant, weird words that would make both of us laugh. Age three would be the point at which "adorable and squishy baby" would give way to a slightly taller, slightly more adult "weirdo mini-person."