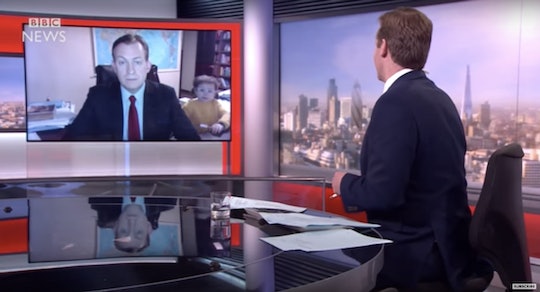 What If The BBC Dad Were A Mom?

I'll admit: I first cringed when I watched Professor Robert Kelly push away his toddler daughter, who walked in on his BBC video interview on Friday. Although I ultimately found humor in the situation, I was bothered by his response — mainly because of the defeat and sadness on his child's face. It's the same look I've received from my toddler when I've tried to keep him away from something. But I wonder, if I were caught on tape, would I get laughs or jeers? What if the BBC Dad were a mom? I have a sneaking suspicion she'd be parent-shamed from the onset.

To catch you up on the backstory: Kelly is a political science professor at Pusan National University in South Korea. He appeared on the BBC to discuss the impeachment of South Korea's first female president, Park Geun-hye — a first in the country's history, according to The New York Times. In the middle of his interview, his toddler daughter march-dances into the room. Without looking at her, and with a slight eye roll, Kelly extends his arm and pushes her back. She looks sad and defeated, but stays there as her dad apologizes to the BBC anchor. A little tot in a walker waltzes in the room next. Their mom rushes in to corral them. It's frantic and awkward and an experience all work-from-home parents have had in one way or another.

The video of his interview went viral quickly. People laughed at BBC Dad's predicament. Kids are unpredictable, after all, and keep you on your toes. I and many other work-from-home parents can relate to the situation as a whole, which is why the video is funny on the surface. Kelly's response to his daughter is also bothersome, though, and understandably rubbed people the wrong way (The Cut has the lowdown on the backlash). Much of that has to do with the fact that he didn't turn around and acknowledge his daughter. It's a move that comes across as cold. But parents aren't perfect. I wouldn't be surprised if he's kicking himself for his knee-jerk reaction; I know I've felt shame for how I've treated my son before.

Still, the majority of viewers find the video hilarious. They feel for the dad and the mom. Some people even relate to the kids. Memes have already started popping up. But the overwhelming positive response has led some to wonder what the reaction would have been if Kelly were a woman. And it's an appropriate question to ask. Mothers are often shamed for how they parent while fathers get praised. Consider the constant criticism Chrissy Teigen faces for her parenting decisions. Her husband John Legend sure didn't experience the same parent-shaming for going out on a date so soon after their daughter Luna was born — a point the singer has made himself.

Or think about this scenario: In August, a mom recounted on her Facebook page how she was shamed by a woman for changing her daughter's diaper on a grass patch near the park restaurant where they were eating. Yet, Pop Sugar report, the next weekend at the park, a group of women praised her husband when he changed their daughter in public.

I know that I have been made to feel like an inattentive mother for working and not dividing my attention between research and my child. I know that, because I work from home, people assume that it's easy to care for my kid and pay attention to my job duties — as if my job is automatically second to motherhood. I also know that my partner doesn't have the same expectations placed on him. So I can't imagine BBC Dad would have been given the benefit of the doubt for not embracing his daughter if he were a mom. I can imagine, though, that if it were BBC Mom, many more people would point out how she isn't a very attentive or loving parent because of how she responded to her daughter or because she dared to work at all. And the language used to discuss and chide her undoubtedly would've been more vulgar and crass.

It's not to say that dads aren't shamed at all. But it seems they receive far more leniency for their parenting choices. If Kelly were a woman, there's no doubt the reaction would have been different.