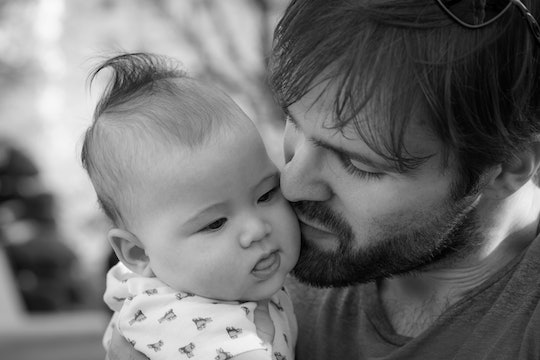 Where Is Dad-Shaming? Moms Aren't The Only Ones On Blast

From almost the moment they become moms, many women also become intimately and unfairly acquainted with mom-shamers. These are the "breast is best" crusaders who criticize mothers who can't or don't want to breastfeed. They're quick to lampoon working moms for spending time away from their kids, while others maintain that stay-at-home moms are lazy, or even overbearing and controlling. It's an exhausting, never-ending litany aimed at one half of many parent duos, but where is dad-shaming?

More Like This
An Ode To The Mom Friends Who Aren't Moms
Every Adorable Photo Of Prince Louis
Josh Duggar's Family Has Spoken Out As He Faces Child Pornography Charges
When Is Memorial Day This Year?

Moms undoubtedly bear the brunt of a culture accustomed to policing what their overall parenting styles and minute actions mean about their dedication (or perceived lack thereof) to their kids. Because of this, they're often viewed as the "primary parent," the one with the "parenting gene," while dads are oftentimes reduced to the status of glorified babysitters. It's a position that's insulting to both moms and dads, as R&B singer John Legend aptly pointed out when Internet haters lambasted his wife, Chrissy Teigen, for going out to dinner shortly after the pair's daughter was born. Although Legend was her date, he attracted none of the vitriol the new mom did.

But although it may not be as visceral or ubiquitous, dad-shaming is definitely a thing.

Elle's Lena de Casparis defined dad-shaming as "the act of emasculating a capable father by creating paradoxes like stating that he is never home when he is at work supporting the family." When society limits its collective view of what successful fatherhoods looks like to demand that they at once provide for their families financially and spend lots of quality time with their children each day, that paradigm seems nearly unattainable  — and, yes, dads are routinely shamed for it.

Media response to a study the Fatherhood Institute, a think tank in the United Kingdom, released last month that found that British dads spend only 24 minutes with their kids for every hour mothers do. It was the widest disparity in the developed world, and prompted The Independent to run the headline "British dads worst in the world." Although they eventually tweaked the sensational statement, The Daily Mail still reported "British men are amongst the worst fathers in the world," in its article about the study.

The Fatherhood Institute pushed back: "Nowhere in our report or press release did we say British dads are the worst at anything," Jeremy Davies wrote. He explained that 82 percent of dads in "couple families" work full-time:

The real story, as we have said throughout our report and press release, is that mums and dads are still not sharing the childcare work. This isn’t because dads are lazy and useless – any more than it’s about mums wantonly failing to earn enough. It’s about the structures that shape our ability to share the caring and earning, not being fit for purpose.

Even though British dads shouldered the shame for spending time away from their families to work, American sports radio jocks ruthlessly ripped Mets second baseman Daniel Murphy when he opted to take a three-day paternity leave when his wife had a baby back in 2014, missing the first two games of the season.

"Go see the baby be born and come back," radio host Mike Francesca said at the time, according to TODAY. "You're a Major League Baseball player. You can hire a nurse to take care of the baby if your wife needs help.”

These conflicting viewpoints create quite the conundrum for dads. The best solution, of course, is for families to determine what works best for them in the parenting department, and do just that, despite what outsiders have to say about it. As long as the kids are happy and healthy, there's really no shame to be had.