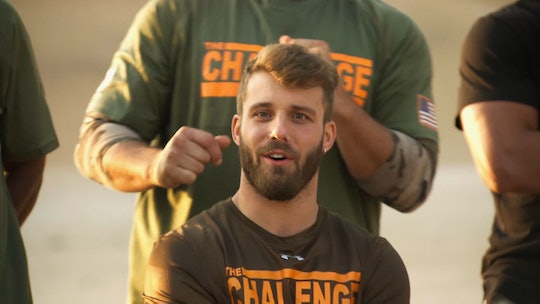 If you are new to The Challenge this season, there’s a lot of jargon for you to learn to understand how voting works, why certain teams are pitted against each other, and how some of them get safety each week. It’s a whole thing, but when you have a long running reality competition series, it comes with the territory. So when you hear the phrase "burn vote" in reference to one of the Tribunal members voting for potential elimination challenge competitors, it can be kind of confusing. A burn vote on The Challenge is actually easy to understand once you learn how the overall voting and elimination process works.

Unlike other competition shows where players vote on a cast member to go home or viewers get to decide for themselves, players on The Challenge all have a say in which two teams are chosen for the killing floor. Then, those players are pitted against each other to secure their safety and make sure the other team is sent home instead of them. Sometimes, it is easiest to "burn" your vote, though, and stay a little under the radar.

For example, if one team already has three votes and they are likely going to be put in the elimination challenge, then you might want to use your vote on another team who won't get any votes. This ensures that you use your vote, which you are required to do, but that you don't get blood on your hands.

If that team who others voted for makes it out of the elimination challenge, they might be out to get back at the teams who voted to potentially get rid of them. In most cases, it’s a good idea to first speak with the team you plan to burn a vote on so that they agree and aren't completely butt hurt when you cast that vote later on.

Other than burning your vote on a likely safe team come voting time before the elimination challenge, there are other forms of strategy on The Challenge. Like any other game where money is on the line and you are forced to live with and work with the competition, it’s important to have a strong social or political game. Sometimes, if you don't have what it takes to physically best your competition, your social game could keep you safe from one week to the next.

Another strategy to take out other players on The Challenge is to remember who voted for you if you are still in the game and take out the weakest player or players. You might have the opportunity to vote against them at some point in the future, and it is important to remember who did you dirty so you can return the favor. As long as they aren't very strong competitors, of course.

You can also target a weaker team with votes so that you are forced to face them in the challenge. If you know you can beat the team, then it would make sense to ensure that they are your potential opponents rather than a powerful or more athletic team. There is always the chance that a powerful player will still fall, though, regardless of who he or she is up against.

There are plenty of ways to target other players and ensure your own safety, but getting out on the killing floor means there is only one way out, which is winning the competition. Before it gets to that point, though, players have the option of actively voting or burning their votes to keep themselves safe and tow the line. Sometimes it is a lot easier to do the latter, especially early on in the game.