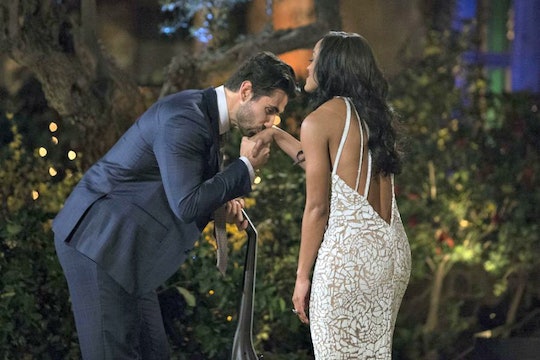 Alex From 'The Bachelorette' Is Making A Name For Himself

If there's one thing we've learned about Rachel Lindsay on this season of The Bachelorette is that she does not play around. Whether it's kicking DeMario to the curb or putting a lid on that pot of Whaboom, Rachel is here to find a grown man to partner up with. Which is why Bachelor Nation is starting to feel like there might be something special between Rachel and Alex. On the group date to The Ellen DeGeneres Show, Alex really stood out. So let's get to know the Detroit-burbs native a little better. For instance, what's Alex's job outside of The Bachelorette?

Alex is a 28-year-old information systems supervisor, which sounds like the kind of mysterious job Chandler Bing had on Friends. But it just means that he manages the data and networks within a company. It's a serious, steady job that comes with a decent salary. It's better than "tickle monster" at the very least. One other plus? He can be an information systems supervisor anywhere in the world, so if Rachel starts to catch feelings for him and wants him to move to Texas so she can be close to her super-tight family, there's some room for compromise. So that's a definite plus.

Additionally, Alex might have some hidden talents that we got a chance to see on the group date. That man can dance.

He was also the most game, too. When DeGeneres told them they'd have to dance in the audience, he was the first one to take off his shirt. And Rachel did not seem to mind at all. After dancing up on a bunch of women in the audience, he even apologized saying, "To whoever's grandma that was that I was dancing on, I'm sorry." Sorta cute right?

During the game of "Never Have I Ever," Alex also made both Rachel and DeGeneres laugh — in a good way. He admitted to peeing in the mansion pool once, which is sort of hilarious and gross all at the same time. He admitted to sending a "classy" nude to a woman before, but behaved like a real gent when asked if the guys had thought about having sex with their Bachelorette. He said he hadn't, which is probably not true at all, but at least he made it seem like he was there for all the right reasons, which is something Rachel is totally into.

During the cocktail party, he admitted to being nervous around her and they had a cute conversation that ended in a kiss. He's cheesy in all the best ways, knows how to bust a move, has a proper career, and Rachel even called him sexy. Suffice to say, it's clear that Alex might be sticking around for a while.