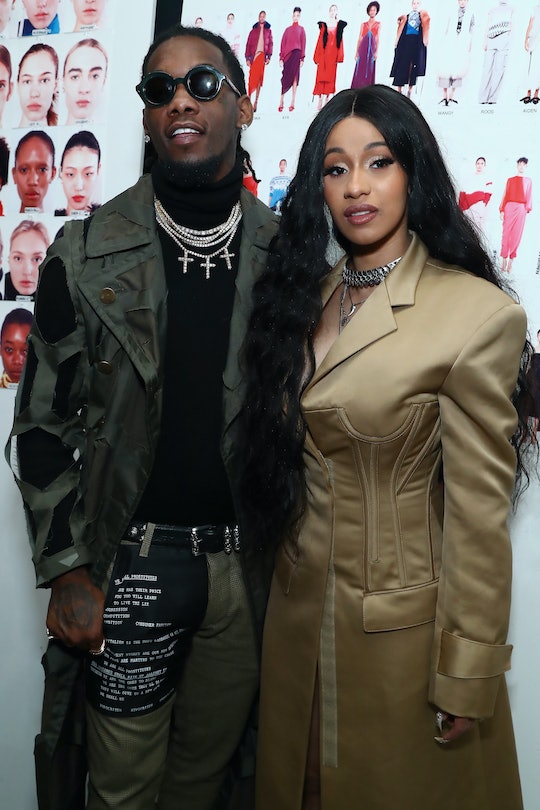 If You're Curious About Cardi B's Baby's Last Name, We've Got You

The day is finally here! Cardi B, the reigning queen of rap, has given birth Tuesday to her first child with husband Offset. So what is Cardi B's baby's last name? The Bronx-born artist has kept up with tradition.

Cardi B announced the birth of their daughter on Instagram on Wednesday morning, according to U.S. Weekly, much to the delight of fans everywhere. In the post, the "Bodak Yellow" rapper shared a photo of herself, nude and cradling her baby bump while surrounded by flowers, with the caption, "Kulture Kiari Cephus 7/10/18🎀🌸."

So which parent does the last name, Cephus, belong to? That would be Migos member Offset, whose full name is Kiari Kendrell Cephus. Cardi B's full name is Belcalis Almanzar, but it's unclear if the Invasion of Privacy artist will change her surname after she and Offset tied the knot in a secret ceremony last year.

But Offset and his daughter, Kulture, don't only share a last name. His little bundle of joy also bears his first name, Kiari, as her middle name. Although the couple didn't name their baby girl after father Offset, her moniker does, in part, follow the recent trend of celebrities naming their daughters after their dads.

Fans have been waiting since April to find out what the newlyweds have decided to call their first child after Cardi B teased the name during an appearance on The Ellen DeGeneres Show. A couple of weeks after her Saturday Night Live, where she revealed her pregnancy, Cardi B told host Ellen DeGeneres that Offset had chosen the name, according to People.

But the 25-year-old Bronx native wouldn't give it away when pressed by DeGeneres for details. Instead, she told the comic at the time that although the name "makes sense," "it's almost tricky," People reported.

"Kulture" isn't so tricky, but the baby girl's name definitely is unique, just like her parents' names. After all, there isn't an entry for "Kulture" in one of the many baby name sites out there (at least, not yet). And, although Migos' last two albums have "Culture" in the titles, according to Variety, the K gives Baby Cephus's name an interesting, fun twist.

Of course, some fans couldn't help but show Kulture Kiari's name a little love on social media. And why not? It's a great moniker that lets the bundle of joy stand out from the crowd.

"Kulture," though, wasn't on the list of guesses for possible baby names. After Cardi B's interview with DeGeneres in April, people began to speculate on social media what the power couple would call their daughter. Most of the names that were tossed out were tongue-in-check — Bacardi, Landing, Nova — but other guesses seem to have more meaning and on the money, according to BET's list. Fans also considered Bronx as another potential moniker because of how much pride Cardi B has for her home borough.

Several people did guess that Cardi B and Offset would name their baby girl Kiari Kendrell Cephus Jr. A the "I Like It" rapper revealed on Instagram, it turns out they were half-right.

Cardi B gave birth to Kulture Kiari Cephus Tuesday night in an Atlanta, Georgia hospital, with her husband by her side, according to TMZ. Kulture is Cardi B's first child, and the fourth for Offset, who is father to sons Jordan and Kody, and daughter Kalea Marie. Although the couple married in a secret ceremony back in September, they still plan on hosting a wedding party later this year, TMZ reported.

There's no doubt that this is an exciting time for the new parents, and we can't wait to watch Kulture grow up. Congratulations to the happy family!