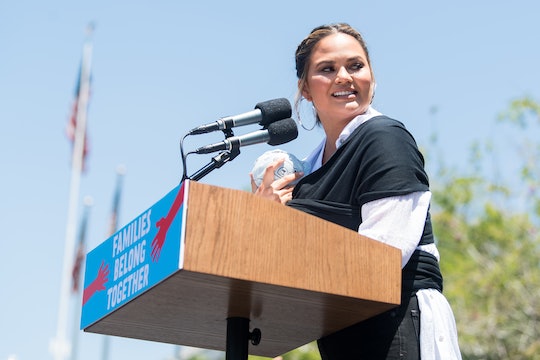 All The Ways Chrissy Teigen Is *Such* A Sagittarius

It's safe to say that Chrissy Teigen has a whole lot going for her: She's a model, TV star, cookbook author, social media queen, and cosmetics mogul, not to mention the wife of superstar Jon Legend and mother to two of the most adorable children ever born. But the best thing about Chrissy isn't her looks or her accomplishments — it's her personality (as anyone who's ever glanced at her Twitter feed should know). How did she get to be so awesome? Could be a cosmic thing: Chrissy Teigen's zodiac sign is Sagittarius, and it turns out she's a pretty classic Archer.

Interestingly enough, Chrissy doesn't seem to be a huge astrology fan herself: She once tweeted, "i don't get zodiac signs. sagittarius, my sign, always applies to me, but so do the other 11. trickery." Trickery or not, however, the Sag connection can't be denied with this mama. From her seemingly effortless clap backs at haters who attempt to shame her for breastfeeding on Instagram or in public or her willingness to open up about postpartum depression or what an after-baby body really looks like for the average mom, Chrissy is fierce, fearless, and ridiculously funny... all traits which just happen to fit the average Sagittarius profile.

For proof of Chrissy's true Sag nature, one need look no further than her Twitter account. The following tweets perfectly illustrate the accuracy of her zodiac sign: