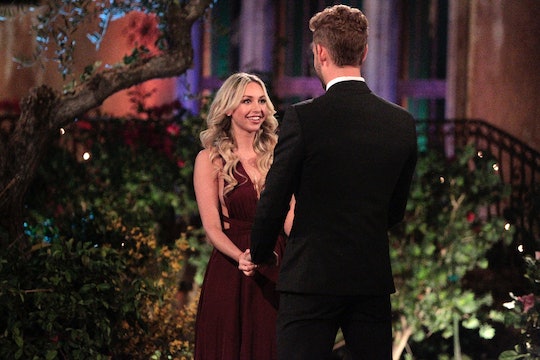 'The Bachelor's Corinne Has A Successful Job

Night One of The Bachelor Season 21 is behind us, and the new crop of women vying for Nick Viall's heart have already made quite the impression. In particular, it's clear that contestant Corinne Olympios is going to be one to watch this season, and potentially become the de facto "villain" of the group. Between Corinne's rich-girl backstory and her aggressive maneuvering to snag one-on-one time with Nick, it's clear that the Floridian blonde will be one of the bigger "characters" this season. But what is Corinne's job outside of The Bachelor?

Corinne's introduction at the beginning of the season premiere was one of the more interesting of the bunch, between her glam hometown lifestyle and apparent live-in "nanny" named Raquel. The 24-year-old hails from Miami, Florida, and her work life was a big part of her intro segment. She explained that she lives and works closely with her family, running (and apparently co-owning) a business that her father started.

According to Corinne's explanation, the company is a "multi-million dollar business," and she is set to take it over from her father. In her online Bachelor contestant bio, Corinne again echoed the importance of her work life, explaining "I own an online business. It's very important to me, but the cool thing is it's online, so I can run it from anywhere."

Corinne didn't explicitly mention what the company does in either her pre-show bio or the on-air introduction, but, according to Google, there is a Miami man named James Olympios who owns a company called ArmorGarage. That company supplies "high performance premium grade epoxy coatings and flooring products," so that could be the family business in question. In any case, based on both Corinne's intro and various photos of her hard at work with her family's business, it's clear she takes her part in the business seriously. Additionally, TMZ has also gone on to confirm that this is the name of the Corinne's family company, so it seems our initial Google search proved to be accurate.

Though Corinne didn't mention this on the show, it appears that she also has a background in the entertainment industry as well. A LinkedIn profile with her name and photograph lists her as a "Model/Actress" signed to DDO Artists Agency, a full-service talent agency based in Los Angeles. She also has currently active profiles on both ModelMayhem and Explore Talent. Mixed in with shots of friends and family, there are plenty of Instagram posts showing Corinne on-set, getting glam for a shoot or filming for shows and commercials. So she clearly had at least moderate success in modeling and acting.

It's unclear whether these endeavors are something that Corinne left in her past, or if she's still hoping to transition into a career in the entertainment industry. It's also way too early to start speculating about whether Corinne is on the show for the infamous "wrong reasons," or if she's just being treated to this season's obligatory "villain edit." In any event, it's clear that Corinne has multiple career paths to return to if her time on The Bachelor proves to be short-lived.