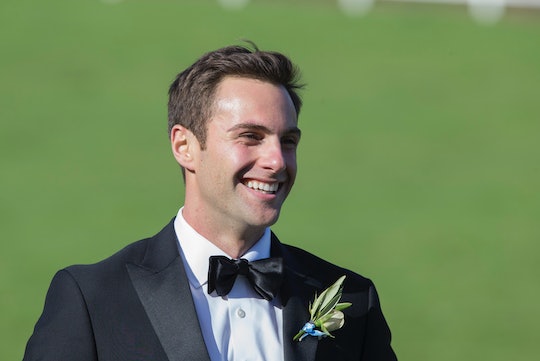 David From 'The Bachelorette' Is One Very Successful Chicken

Becca Kufrin was definitely given her pick of a pretty impressive roster of men this season on The Bachelorette, but after enduring what she did on the finale of The Bachelor, production pretty much owed that to her. Surprisingly, one of the more impressive men is the chicken suit guy, a.k.a. David Ravitz, who proved with the costume gimmick that he definitely has a fun side to him. But what is David’s job outside of The Bachelorette? He’s one of the more successful contestants this season, as his Bachelor bio has his job listed as venture capitalist. That’s definitely a far cry from what you might expect a guy dressed in a chicken costume would do for a living, but he seems to live a pretty lavish lifestyle, likely thanks in part to his work.

According to Forbes, a venture capitalist is "a professional investor who deploys third-party funds into relatively early-stage companies," which means that David must have some pretty extensive knowledge of smart financial moves and which companies could benefit from investments and go far because of them. This doesn't mean that he’s investing his own money, but instead taking money from other clients to invest it properly in companies close to the ground level, giving his clients a leg up on others and, in turn, himself. Sounds pretty lucrative for the chicken suit guy, I must say.

David currently lives in Colorado and Salary.com lists the salary for a venture capitalist in Colorado between $133,212-$221,131, but there are several factors which can make the low end lower and the high end much higher. Depending on the individual’s education, experience, expertise, and the company they’re working with, they could be making much more or less than that, so David may be one of the more successful men this season.

It also probably helps that he comes from a family who likely already knows plenty about finance and investments. His family owns and operates a string of New Jersey supermarkets under the name of Ravitz Shoprite, so chances are, David grew up with some knowledge of business and finances, which means that he could very well be on the higher end of the salary for a venture capitalist. He is just 25 years old, though, so he could just be starting out in his preferred career field.

Although David’s Instagram isn’t as full as fans might like, he does have some photos that give you a good picture of what his life might be like outside of The Bachelorette. In the past, he’s spent time volunteering in Kenya, so he’s definitely grounded despite any success he may have found with his career. And like I said, since he was quick to dress up in a chicken suit for the premiere of The Bachelorette and be "that guy," he obviously has a sense of humor despite his seemingly impressive career.

To be fair, Becca’s season is full of successful men with jobs like attorney, sports analyst, and software engineer, so a venture capitalist is one of many professional adults likely ready to settle down, but it still makes you have a certain amount of appreciation for David so far this season. It remains to be seen what he has to offer besides the courage to wear a costume instead of another well-tailored suit on premiere night, but it’s gotten him this far, right? Now all he has to do is prove that he and Becca can develop a real connection and that he’s more than a chicken suit. Although to be honest, the costume made him adorable right off the bat.