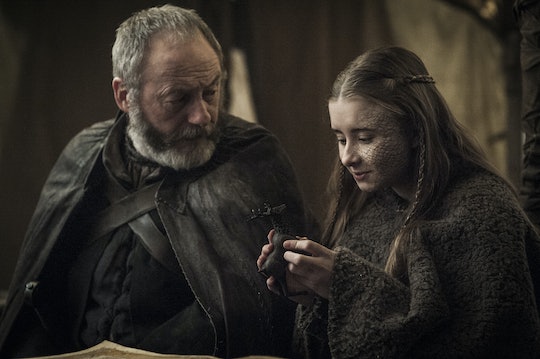 What Is Davos Doing At The Fire On 'Game Of Thrones'? He Still Doesn't Know About Shireen

One of the best relationships of Game of Thrones was that born out of Stannis Baratheon's locked away daughter and Ser Davos. He was the right hand man to Baratheon, loyal and actually good, compared to almost everyone else in Westeros. But amidst all the craziness during Season 5, they were split up and Davos never got to see what happened to Shireen, at the command of Melisandre. So, will Davos find out about Shireen on Game of Thrones? In the promo for Episode 9, the penultimate episode of Season 6, we see Davos standing at ashes on top of snow, in the area that appears to be where Shireen was burned alive.

Earlier in the season, Davos does ask about Shireen, given the status of Stannis and his army being totally slaughtered while trying to fight Ramsay Bolton's army of like triple the size. Before Melisandre can tell him about the sacrifice she made of Shireen, or a lie to cover it up, Brienne pops up and tells Davos all about her witnessing the battle between the armies of Ramsay and Stannis and how she'd killed Stannis herself. And unfortunately, that is the last Davos speaks of Shireen in Season 6 so far.

Now, Davos is going to be out in the same plains where his former king, Stannis, led their men in a fight against the same army Jon Snow and his men are going to be up against for the Battle of the Bastards. It makes total sense that the image of Davos standing at the ashes, with fire in the distance below, is the same spot where just last season, poor Shireen died. But what is Davos doing there? Does he somehow know what happened?

If Davos finds out what happened to Shireen on Game of Thrones, then he will likely hear it from Melisandre, and at that point, not even her famous ruby necklace will be able to save her 100-year-old ass. It's easy for us to forget the sacrifice she claimed was needed when she brings back our beloved Jon Snow, but she also killed a little girl, ya'll. Not cool. Not even on Game of Thrones.

There's also the possibility that while standing at the ashes and sticks, Davos finds the little stag, the sigil of House Baratheon, that he'd given her as a present. Remember when he did that and she helped the man learn how to read? Yeah, we can all thank that monster George R. R. Martin for getting us right in the feels. If you look closely as Shireen's hands while she is being tied to the tree branch, you can see the little stag, clutched tightly in her hand. I don't know how a wooden toy survives a roaring fire, but let's just chalk it up to reasons. Game of Thrones reasons.

Again, let's give a collective groan of sorrow for what was probably one of the saddest deaths on Game of Thrones to date. Will Davos find out about Shireen? It's probably well past time for it to happen, that's for sure. Melisandre has served her purpose and given us The Prince That Was Promised, a.k.a. Jon Snow. With Season 6 of Game of Thrones coming to an end, Davos seriously deserves to get some justice for poor Shireen.