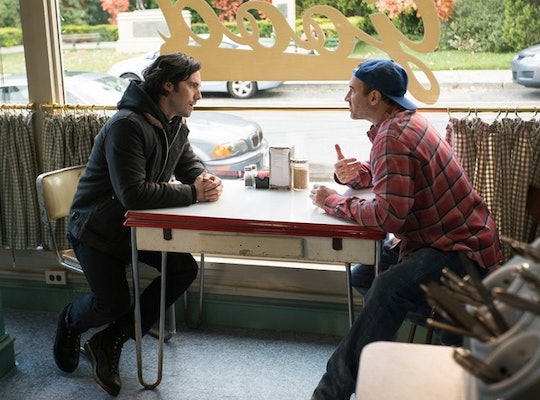 What Is Jess' Job In The 'Gilmore Girls' Revival? The Trailer Hints At A Career Path

If you haven't already sat down and watched the official Gilmore Girls revival trailer a hundred times by now, then you may want to take some to do so ASAP. Because, let me assure you, it's definitely worth your time. Not only does it provide vital clues about what Gilmore Girls: A Year in the Life will be about (Richard's funeral), but it also gives us glimpses into the lives of other characters outside of the main Gilmore clan, some of which we haven't seen for quite some time. One person who particularly caught my eye was Jess, who still seems to have a close relationship with Rory. But what is Jess' job in the Gilmore Girls revival? The trailer may very well indicate a potential career path.

During the clip, viewers can see Rory discussing her worries with Jess about where her life is headed, and he's comforting her in pretty much the best way possible: with alcohol and compliments. (Really, is there anything better?) He has always believed in her and that definitely hasn't changed even after all this time. But that's not what I'm here to discuss. I'm here to talk about what Jess is currently doing with his life career-wise. And if you notice, the background of where the two of them are talking could provide a vital clue...

I know it may be hard to take your eyes off the gloriousness that is Jess, but if you can manage it, you'll realize that the background location appears to be a library or maybe even the old Stars Hollow Bookstore, unless I'm otherwise mistaken. (Either seem equally possible!) And while I don't necessarily think that means Jess is now a librarian or bookstore owner, it could hint that his time as an author will continue on throughout the revival.

The way I see it is the library/bookstore would be a perfect place to do research on an upcoming book. And since we know Jess already has one paperback novel under his belt, it's just as possible that more have followed. Then there's the fact that the writing on the glass behind Rory seems to say Stars Hollow Publishing. So maybe Jess is running a publishing company out of the town he used to loathe. I mean, how fitting would that be?

Granted, it's not as if Rory wouldn't have a reason to be at the library or bookstore as well. (No one loves books more than this girl.) So their meeting place could be because of her and not the other way around. But if Rory is coming to Jess for advice, then it would make sense for her to seek him out. And if he's at a bookstore, it may very well have something to do with his chosen employment.

For now, this is all just mere speculation on my part. Odds are, the series won't confirm too many details until its Nov. 25 Netflix release. But in the meantime, it's still fun to guess.