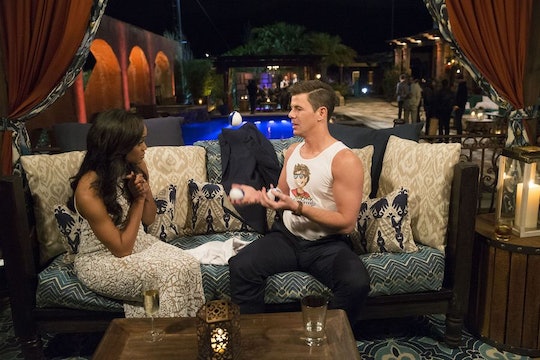 Lucas From 'The Bachelorette' Is Pretty Successful

Even though his occupation is listed as "whaboom," Lucas from The Bachelorette has a couple of seemingly successful careers. Even if part of his income does rely on promoting and selling clothes with "whaboom" written across the front. That being said, what is Lucas’ net worth? The Bachelorette contestant is a college graduate who studied business and law at the University of California at Berkeley, so he definitely had an impressive education despite how he may come across.

Although there is no definitive net worth for the whaboom guy, at least not yet anyway, his different career areas might give us some clues as to how much he’s worth, and it could be a decent amount. As someone who owns his own production company, YKnotWorld Productions, and also acts in commercials and works as a real estate developer at the same time, Lucas might have a net worth in the six figure range.

According to Payscale, the median income for a real estate development manager in Los Angeles is just over $96,000. While Lucas’ real estate work is vague at best, you can assume that his education did afford him the ability to work out the business side properly so he could focus on the entertainment content that obviously makes him the happiest.

In addition to his production company and the real estate, Lucas also performs standup at the Hollywood Improv and The Comedy Store, so he’s definitely never not working on something. He might seem to be on The Bachelorette "for the wrong reasons" (there’s always a couple of them, right?), but the guy definitely has a strong work ethic, so you have to give that to him at least.

Since Lucas also works in commercials and most recently appeared in one for Jockey, Payscale lists the average hourly rate for a commercial actor in the $40/hour range. So whatever Lucas’ actual net worth might be from all of his different projects (and seriously, he has a ton), the whaboom guy has more than likely done well for himself. And with the growing interest in The Bachelorette contestant’s catchphrase that fans of the show either love or hate, his popularity is likely to rise even higher. Honestly, I can’t decide if that’s a good thing or a bad thing.

But somehow, Lucas has lasted longer than the season premiere, surpassing some of the more pessimistic fans’ expectations, and only time will tell how far he’ll make it this season on The Bachelorette.