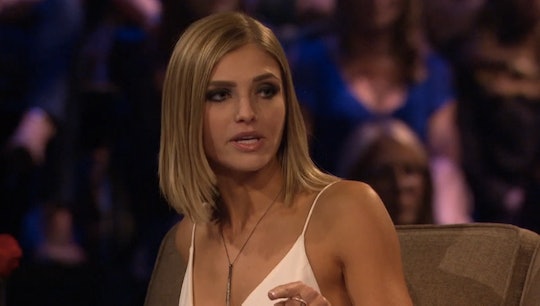 What Is Olivia Caridi Doing Now? The 'Bachelor' Contestant Is Keeping Busy

Olivia Caridi's run on season 20 of The Bachelor may have been short-lived, but it was far from uneventful. In fact, the contestant unintentionally became an instant meme overnight with her wide mouth, "ugly" toes, and total confidence that she was the woman for Ben Higgins. But what is Olivia Caridi doing now? From her presence on the Internet, it looks like she's returned to her regular, pre-Bachelor life. Well, not entirely. Before taping the reality show, Olivia was a broadcast journalist in Virginia, but she still hasn't returned to work. That isn't necessarily a bad thing, since she seems to plan on possibly returning to the news desk someday, according to Bustle. She wrote on her website, "I gave up my job to be on the show, but I did not give up my career."

About that website. Olivia has been using her newfound celeb status to drive traffic to her blog, where she writes about her life, in general. Most recently, she posted about attending a screening of an anti-bullying film (donning an very cute jumper, no less) and excerpts from her "favorite book," Daring Greatly, by Brene Brown. In fact, a lot of Olivia's post-Bachelor life seems to be working towards using Brown's lessons about being vulnerable in real life.

In fact, she even writes about her experience on The Bachelor specifically in relation to Brown's work:

Months ago, I chose to try reality television to find love. I thought, let me abandon shame and fear. Let me be vulnerable. Here’s my chance to put myself out there. ... I was rejected, and, in turn, heartbroken. Was that a failure? It might look like it. But it wasn’t. I realize my vulnerability wasn’t and isn’t a weakness – it’s strength. It takes guts to put your heart out there, to give your heart to someone who could break it, but to trust that they won’t. It takes guts to expose all that you are.

Olivia didn't just get rejected by Ben Higgins. She was pretty much rejected by Bachelor Nation as a whole. She was mocked for her personality and her looks. If anyone knows about vulnerability and bullying, it just might be her. Yes, she came off as a bit intense (but think, how would you look while vying for a lover's attention on national TV?), but took most criticisms on the chin. In an early episode, an entire houseful of women were mocking her toes of all things. Her response? "Perfection is so lame. So lame."

Instead of dwelling on the entire experience and kicking herself, Caridi has a good sense of humor about all of it and seems to be using her failures, if you can even call them that, to try to help other women. That's pretty cool. Former Bachelor contestant Sharleen Joynt told Us Weekly after the Women Tell All special Monday night that being in the Bachelor-verse isn't easy. "No one is really their best self on the show, it brings out your insecurities," she said.

It really can't be. But being able to use the show as a platform for sharing your point of view and sense of humor with fans? That's not a bad perk at all. Even if everyone had to make fun of you first to get there.