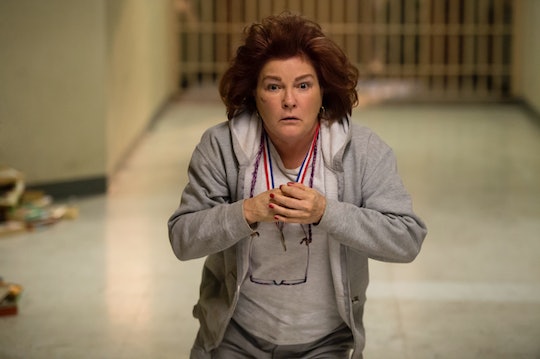 More Of Red's Backstory Is Revealed On 'OITNB' Season 5

Warning: spoilers from Season 5 ahead! There’s no doubt that Season 5 of Orange is The New Black was unique, spanning just a few days (three to be exact) and encompassing the riot that had broken out at the end of Season 4. But what didn’t change were the flashbacks fans have come to expect from the show. In Episode 9, viewers saw another look at Red’s past, but what is Red’s backstory on Orange is The New Black?

She’s always been the same strong-willed and decisive woman, and her backstory as a factory worker in Soviet Russia is further proof of that. Until now, the backstory we got of Red was an early '90s version of her trying to fit in with the other Russian women of the neighborhood in America, while using her and her husband’s market as a front for their illegal dealings with the Russian mob.

But long before that and before she even came to United States, Red was being pursued by a boyfriend she thought to be too boring (who she would later marry) and leading a life that clearly didn’t make her happy. Enter 1970’s discos and taboo Levi’s jeans. Red’s friend Nadezhda apparently introduced her to a whole other world and from there, Red’s life of crime began.

But instead of running a prison kitchen and working the different guards at said prison, Red was just learning the ropes of illegal smuggling. With her new hunky boyfriend in tow, Red worked at smuggling in Levi’s to sell on the black market and rebel against her country. But after Red’s friend turned up missing, it was clear that she had to leave or risk being arrested herself for not only carrying the contraband, but selling it too.

But because none of the women of OITNB can catch a break in life, prison, or even after prison life, Red’s life of sticking it to the government by way of smuggling and selling contraband was short-lived. Once her friend went missing, Red’s former boyfriend (Dmitri, that dull one she casted aside earlier) convinced her to marry him and pretend to be Jewish Russians so they could leave for America together. (Turns out he wasn't so boring after all.)

Red’s backstory on OITNB showed a younger version of the person she is now, but in this case, she was trying to show her peers that there was a world outside of Russia and the oppression they faced. Flash forward to present day, and Red is still trying to inspire others, in this case the women of Litchfield, while maintaining as much of her values as she can. I don’t know when she’ll be able to feel totally herself again after Season 5, but Red’s backstory on OITNB showed fans that she’s always had the strength to keep going.