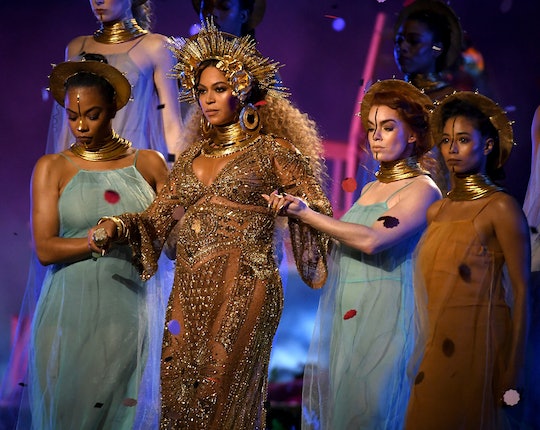 When Beyoncé shared her first photo of her newborn twins on Instagram, the caption left some fans with big questions about the babies' names, one of which was, exactly what is Rumi's name? The twin's names were discovered on June 30 when Beyoncé and JAY-Z filed to trademark Rumi Carter and Sir Carter, TMZ reported. As a result, people assumed that one twin's first name was Sir, the other's first name was Rumi, and each twin's surname was Carter. Pretty straightforward, right? Not so fast.

When Beyoncé posted the photo of the twins on Instagram, the caption read:

plus a heart emoji and five emojis representing the members of her newly-expanded family.

Fans very quickly noticed the grammatical construction of that caption. It doesn't read "Sir Carter and Rumi Carter" or "Sir and Rumi Carter." Since there's no "Carter" on the end of Rumi's name, it suggests that these might possibly be the babies' first names, that "Sir Carter" is in fact that baby's first name, and his or her full name might be "Sir Carter Carter." I know. Let's take that in for a second.

But if "Sir Carter" might be that twin's first name, and his or her full name is "Sir Carter Carter," that begs the question of what Rumi's full name is. Does that twin have a middle name we don't know about? Will his or her name be just "Rumi Carter" while his or her twin's name is three names long, with a double "Carter" in there? Is Rumi not a Carter at all? Does he or she just have a single name, like Madonna? What does it all mean?

Of course, fans could be reading too much into the caption. It's very possible that the twins names are exactly what everyone thought (and what was reportedly stated in the trademark filing). Perhaps Beyoncé didn't notice when she wrote the caption that it could be construed to mean that Sir is a "Carter Carter" and Rumi is... ? Maybe the captions simply reflect how Beyoncé refers to or thinks of the twins in her own mind. "Rumi" is adorable and also very meaningful all on its own, and don't pretend that if your kid was named "Sir Carter" (with "Sir" as the first name and "Carter" as the last name) that you wouldn't enjoy referring to them by the full "Sir Carter" much of the time.

That said, given how carefully directed the photo itself obviously was, and the careful attention Beyoncé gives to most everything she puts out in any area of life, it is also hard to believe that she would just dash off this caption without having one or five members of her team read it over first. Perhaps the simple answer to all of this is that even Beyoncé could use a copy editor.