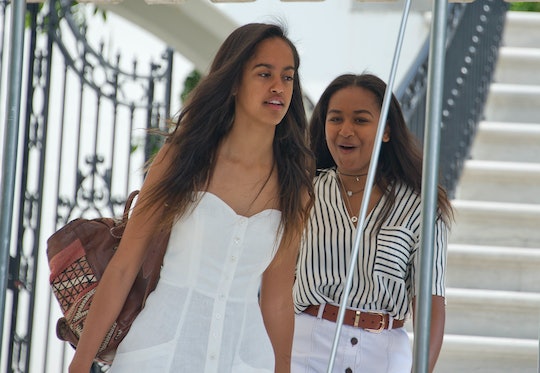 After The White House, Sasha Obama Is Just Living That Regular Teen Life

When President Barack Obama was initially inaugurated back in 2009, he arrived with his wife Michelle and their two little girls. His oldest daughter Malia was 10 years old while his youngest daughter Sasha was just 7, the youngest person to live in the White House since John F. Kennedy Jr. lived there in the 60s. A whole lot has changed for the Obamas since the early days. Michelle Obama has written a bestselling memoir, Malia Obama is a student at Harvard University, and then there's Sasha. If you're wondering what Sasha Obama is up to now, you probably haven't seen her prom photos from this past weekend and had a subsequent heart attack at how quickly time has flown by like some of us. Because, as children do, Sasha Obama has grown up. But in her case, it honestly felt like it happened over night.

When the Obamas vacated the White House that fateful day in January 2017, Sasha Obama had been living inside its historic walls for eight years, or essentially half of her life. It must have felt like a monumental change for the young girl in a lot of ways, not the least of which because her big sister Malia went off to intern for the Weinstein Company the fall immediately after, according to Deadline.

After leaving the White House, the family stayed in Washington, D.C. to make sure Sasha could finish her last few years of private school at Sidwell Friends School, where she celebrated her Sweet 16 with friends the June after leaving the White House, according to Business Insider, and already showed a real eye for fashion by wearing a chic red satin gown to the event.

The youngest Obama sister was trending all over the place in recent days for another reason: the 17-year-old went to her prom with a handsome date and looked incredibly grown up.

Sasha reportedly attended her prom with date Chris Milton, according to Newsweek, and the two posed for pictures with his mother as well as Malia and Michelle Obama before heading out to have what was hopefully a fun night. Mostly just like any other kids their age would do.

I think that's the sort of beautiful thing about Sasha Obama's life in the years since she left the White House; other than the fact that her parents remain famous and very much in the public eye, it seems as though she's been able to live a normal life. At least in relation to the life she lived in the White House.

As for the future, there have been reports that Sasha could attend the University of Michigan in the fall based on a post on her private Instagram that hinted as much, as Page Six reported in December 2018, but nothing has been confirmed. But the reality is, she doesn't have to confirm her plans with the public. She is now a private citizen, a teenager living life, and for once it seems like everyone is just pretty OK with that fact.