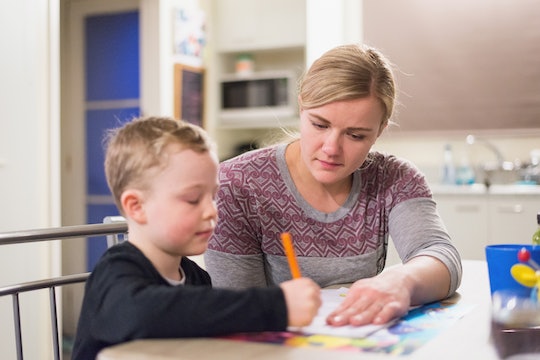 You know what I do when my kids "forget" a homework assignment? I confiscate the electronics and veto meet-ups with friends until they catch up with the work. You know what I don't do? Do the homework myself, beg the teacher to have mercy on them, or look into transferring them to schools that give less work. I guess I'm not going to be mistaken for a mom who practices snowplow parenting anytime soon, and I'm okay with that (even though I sometimes wish I could do whatever I can to make life easier for them)

The term “snowplow parent,” as described by The New York Times not long ago, describes moms and dads who remove roadblocks that might be putting their kids at risk of failure or setbacks in life. The newly coined term first gained attention earlier this year, when 50 people, including actresses Lori Laughlin and Felicity Huffman, were indicted in a college admissions scam. To make sure their teens got into prestigious universities, the parents allegedly bribed the schools to the tune of hundreds of thousands of dollars.

Why do parents snowplow? “Because we love our children desperately and hate to see them fail,” explains Dr. Michele Borba, a globally recognized educational psychologist and parenting expert, in an email to Romper. “Sometimes we’re just doing what our own parents did. We’re also a very competitive world, and if we see other parents doing the same thing, we go into catch-up mode. But it’s complicated, and different parents have different reasons for snowplowing.”

Although the media attention has focused on the well-heeled parents who use their money or clout to help their children get ahead, few of us can say that we’ve never put on the plow to make life a little easier for our kids. We help with homework and beg teachers for extra-credit assignments. We ask coaches to give our kids a coveted position or more time in the game. We drive teens to school when they oversleep and miss their bus. We talk to our child’s BF friends (and maybe even their parents) to work out a solution when the two of them have a fight.

As well-meaning as our efforts are, snowplowing ultimately does more harm than good. “When we step in too often, four things can happen,” explains Dr. Borba. “First, our children can become too dependent on us. Second, they become a little less resilient. You learn to bounce back by realizing that you can bounce back. Third, they start to shrivel up and become less self-sufficient. They curtail their potential. And fourth, they lose confidence in themselves. They start thinking, ‘Mom and Dad don’t think I can do it myself.’”

Snowplow parenting can become a habit that’s hard to stop, even when the kids are out of the house. USA Today recently reported on a poll of parents of children 18 to 28 regarding the help they give. More than three-quarters of parents admitted to reminding their adult children of deadlines for schoolwork and other responsibilities. Almost as many said that they make their children's doctors' appointments. Parents of college students admitted to helping their kids study for tests, doing their assignments, and even calling or texting them in the morning to make sure they don’t miss class.

Then there are the extreme cases. In a recent Twitter thread that went viral, public policy executive Carol Blymire described a conversation she overheard between a boss and her 20-something employee. The young woman had misspelled the word “hamster” on something she’d written and refused to make the correction. Instead, she got her mom on speakerphone, who agreed that the boss was an “idiot” and that her daughter should file a complaint with the boss’s supervisor, according to Blymire.

Should we be following a hands-off policy when it comes to helping our children? Not necessarily. As Dr. Borba notes, “Safety is always the number one priority, and there are times when we have to ask, ‘Do I need to advocate for my child?’” Bullying, she adds, is one of those times where parents should step in and do what they can to ensure their children’s well-being.

In other situations, it’s often best to ask yourself whether you’re being too quick to solve your child’s problems. If you think you might be becoming a snowplow parent, “pat yourself on the back and give yourself a spa day!” says Dr. Borba. “It’s an eye-opening moment, and now you can do something profound: change a habit that’s been entrenched.”

She offers these suggestions for kicking the snowplow habit:

There's an old saying: "There are two things of value we can give our children: roots and wings." Snowplow parents may have the best of intentions, but they could end up with children who never learn to fly.