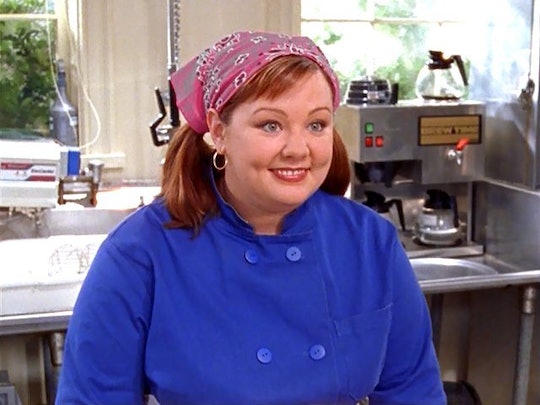 What Is Sookie Doing Now In 'Gilmore Girls'? She Took A Break From The Kitchen

(Warning: This post contains spoilers from Episode 2 of the Gilmore Girls revival.) The first time the Dragonfly Inn was shown in the Gilmore Girls revival, Lorelai was walking and talking with Michel, as she'd done so many times before, and when they arrived at the kitchen, you almost expected Sookie to be at the stove, stirring a pot or at the island, decorating a cake. But she wasn't, so what is Sookie doing now? The Gilmore Girls revival failed to have her appear in Episode 1 of the continuation series, but Lorelai and Michel did mention her at least.

As Lorelai fired someone who seemed to be yet another replacement chef at the Dragonfly Inn, Michel pointed out that Sookie had taken a sabbatical for a couple of months but, several months later, still hadn't returned to work. So right now, Sookie is M.I.A. as far as the Gilmore Girls revival is concerned. Melissa McCarthy is set to make an appearance in one of the four 90-minute episodes, but since she isn't going to be a steady fixture in the series, there are likely going to be several brushed over excuses until Sookie makes her appearance in the Gilmore Girls revival.

So what is Sookie doing now? Apparently, anything but cooking.

In Episode 2, Jackson made his first appearance and made the excuse that Sookie just wasn't able to make it to the international food festival in the town square, and instead was tending to their vegetable gardens at home. It's not exactly ideal to still be without Sookie by the second episode of the Gilmore Girls revival, but at least they aren't totally avoiding the topic of her all together. And it will make it all the sweeter to see her appearance when it comes.

Despite being the finest chef that Stars Hollow has ever known, Sookie is apparently on a break from cooking for now, as she keeps her distance from the inn and does her own thing for a little while, working on the farm vegetables that Jackson was previously known for. Lorelai said, at one point, that Sookie left, leaving her and Michel as the remaining people to run the inn together and that she didn't want to lose him too, so it's clear that Sookie chose to leave and after her appearance, she probably won't return again.

No five-star chef, and not even Rachel Ray, can replace Sookie in the kitchen, according to Lorelai. Stars Hollow and Gilmore Girls in general isn't really the same without some healthy doses of Sookie, but at least she has an appearance in the Gilmore Girls revival, however short it might be.