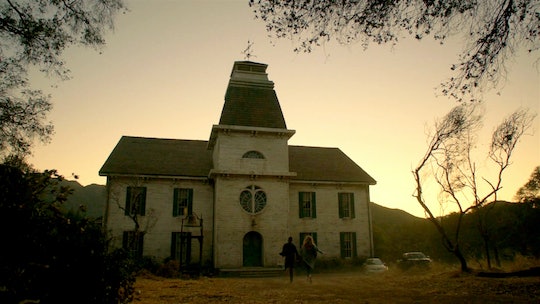 Just when fans thought they'd seen the last of the shows-within-the-show, American Horror Story's sixth, spectacularly meta season one-upped itself once again. "Chapter 10," the season's finale, featured multiple in-universe reality TV shows. The most gruesome of the bunch was "Spirit Chasers," a ghost-chasing show that should look pretty familiar to any paranormal investigation fans. But exactly what is "Spirit Chasers" on AHS: Roanoke modeled after?

From the format to the over-excited personas of the two hosts, it was abundantly noticeable that "Spirit Chasers" was a transparent copy of Ghost Hunters. I mean, they literally just swapped in synonyms for the two words in the title of the real show. The "Spirit Chasers"/Ghost Hunter connection was even clearer than the "Crack'd"/Snapped one from earlier in the episode — and that was already pretty damn obvious.

The prevailing opinion among AHS fans on Twitter was that the steadily increasing numbers of reality shows within the larger frame of the season was getting to be pretty hilarious and/or ridiculous. While the first half of the season was presented as "My Roanoke Nightmare," as Roanoke went on, the number of different reality shows within the show just kept on multiplying. "Return to Roanoke: Three Days in Hell" took place over the following four episodes, with "Chapter 10" rounding out the season with no less than three distinct docu-style shows. "Crack'd," "The Lana Winters Special" (Lana's cut-short interview with Lee), and "Spirit Chasers" took up the majority of the last installment of the season.

If you're keeping count, that's FIVE separate faux-shows within this season of AHS.

In any event, "Spirit Chasers" was a short-lived addition — in every sense of the word. The ill-advised off-brand ghost hunters decided to break into the fenced-off Roanoke property in order to investigate the paranormal occurrences that had enraptured the nation's attention. I could see this happening after the events of "My Roanoke Nightmare," maybe, but after "Return to Roanoke" was aired, apparently in its full, gory glory? No way.

According to the "Spirit Chasers," there was still some discrepancy as to whether all of the Roanoke 2.0 on-screen deaths had actually occurred on the property, or if it was some kind of hoax. Unfortunately for that group (and the two innocent cops who showed up to help), they quickly learned that it was not, in fact, a hoax. In short order, the four people involved on the show, the actor who played Cricket Marlowe, and the two cops were killed by the various ghosts wreaking havoc on the land. It was the blood moon, after all. They really should have known better.

Twitter's level of sympathy for the ill-advised faux-ghost hunters was not very high either.

Despite the overall "Spirit Chasers" brevity and silliness, they did have one notable moment before getting unceremoniously slaughtered. One of them gave us a great callback to Season 2, remarking that the Roanoke house was "scarier than that asylum."