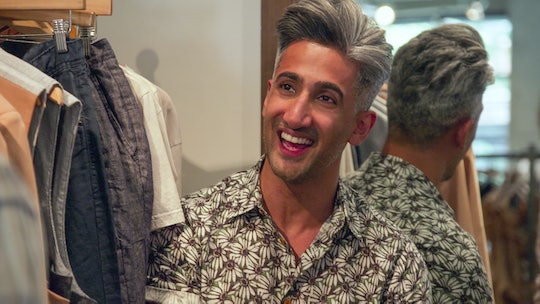 The Netflix reboot of the early 2000’s hit show, Queer Eye for the Straight Guy, is the makeover show you didn't know you needed. That is until the geniuses behind the streaming platform premiered it in the form of Queer Eye in February 2018. Among the hosts of the new reality TV series is Tan France, who definitely seems to know what he’s talking about, so what is Tan France’s job outside of Queer Eye? It totally makes sense that he’d be brought on to help hapless people figure out how to dress in style for less since he himself is an actual designer in real life. What sets Queer Eye apart from the previous installment of the series is that this time around, the subjects of each episode are shown not only how to dress with style and class, but how to do so in an affordable way. I’m essentially taking all kinds of tips from this show for myself and it’s amazing.

For France, though, it’s only natural that he be the official fashion expert of the new fab five. For the past 15 years he’s worked in fashion, sometimes behind the scenes. He studied fashion at Doncaster College and before opening his own clothing company, France worked at a few different fashion retailers. So needless to say he definitely know what he’s talking about when it comes to both cost and style for the average person.

In 2011, France started the women’s clothing line Kingdom and State. According to an interview with Omika.com, doing so was a huge step in his career. "After working at Zara and a couple of other fashion retailers, I knew that it was time to start my own brand," the Queer Eye star revealed. "I had always wanted to focus on womenswear, but I didn’t know what exactly. My last job before Kingdom and State was with a modest brand called Shade Clothing, where I was the company Director. That was the turning point for me. I wanted to create a company that offered modest clothing, but one that was fashionable enough to compete with other young fashion brands out there."

His inspiration for his clothing is from both the runway and what he sees in everyday wear, which is probably how some of his designs become so unique on their own and why he’s been able to continue to climb in the fashion industry. With his role on Queer Eye, you have to expect that his notoriety as a designer will continue to grow.

France developed an interest in fashion from a young age and spent summers working in his grandfather’s denim factory, which makes sense for the beginning of what is already a highly successful career in the business. But outside of fashion, France also has a memoir coming out, which has yet to be officially titled, all about his upbringing and rise in his field. The untitled book is set to be released on February 26, 2019, so it’s still a while away, but if the success of Queer Eye is any indication of fans’ response to the show and France himself, then I predict a bestseller for the fashion guru.

France, who lives with his husband in Utah, has continued to work on his fashion line over the years, even coming out with swimsuits. Everything can be found online or in stores in the United States, Canada, and even Brazil. It’s no big shocker to literally anyone that France’s job outside of Queer Eye has everything to do with fashion since he is the resident expert and has already proven himself to be plenty worthy of the position on the show.