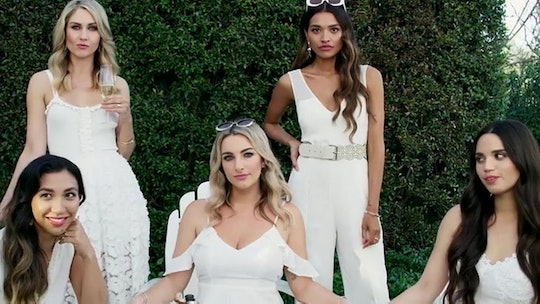 Teen Mom OG has spawned several spin-offs over the years, some which continued the stories of the young moms fans met in the show that started it all, 16 & Pregnant. Others, like Young & Pregnant, introduced new moms entirely, and Teen Mom Young Moms Club is going to do the same. Only some fans might recognize the moms from the previously short-lived MTV reality series Pretty Little Mamas. So, what is Teen Mom Young Moms Club exactly? Pretty Little Mamas was like Teen Mom meets The Hills and, at times, seemed a little more fabricated than raw and real like an actual docuseries.

It’s possible that the ratings and viewership weren't good enough to keep the show on MTV’s schedule because last year, without warning, Pretty Little Mamas was taken off the air and the episodes weren't even available on MTV.com. MTV also failed to release an official statement about the series and whether or not it would return.

Now, fans finally have their answer in the form of a revamped version of Pretty Little Mamas with a new name that promises to follow in the same style and format as the other shows in the Teen Mom franchise.

The official Twitter page for Teen Mom Young Moms Club released a statement earlier this month, explaining that the show will continue to follow the same moms from Pretty Little Mamas in a different format that fans might enjoy more. "Time to address the [elephant] in the room. We understand the confusion around the announcement of #YoungMomsClub. At the heart of #PrettyLittleMamas was a story of six moms trying to navigate life, relationships and motherhood," the tweet said. "We quickly realized that story is best told through the #TeenMom lens. You’ve seen some of their journey, but we hope that you’ll take a chance to experience the rest."

What sets Teen Mom Young Moms Club apart from the other shows in the franchise is the fact that these moms all live in the same town and already know each other. This means more drama of course, but also the possibility of each mom having someone in a similar position to lean on for support. It’s a different format than that of other Teen Mom shows, which feature segments of each mom in their respective hometowns, but it could be the unique take that draws in Teen Mom fans.

MTV’s goal in bringing the show into the Teen Mom franchise was likely to get more viewers that the show didn't gain the first time around. But it could also mean a more realistic take on this new set of moms’ lives than what was shown on Pretty Little Mamas. The trailer alone shows how similar the new series is in format and design to other Teen Mom shows and although some diehard fans might not be into another show piggybacking on the success of Teen Mom OG, it’s happening.

Tyler Baltierra, one of the stars of Teen Mom OG, tweeted about Teen Mom Young Moms Club and called out MTV for reviving Pretty Little Mamas as something new in the franchise he spent the past 10 years in.

Teen Mom Young Moms Club’s Twitter account tweeted about how the show will work moving forward, so hopefully some fans understand it a little better. But if they are anything like Tyler, they won't take too kindly to a new show in a franchise that made success following teenage parents rather than a mom-centric version of The Hills. Still, given the fact that it’s been re-branded and parts have been filmed to mirror the same style as Teen Mom, Teen Mom Young Moms Club could see the success that Pretty Little Mamas didn't quite grab.