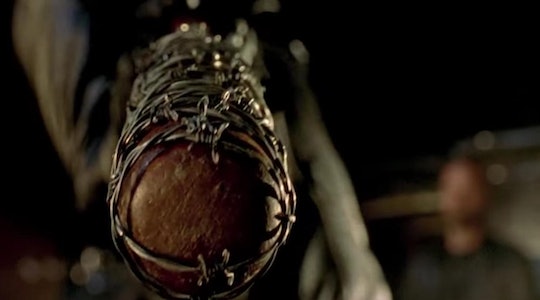 What Is The Backstory of Negan’s Bat? The History Behind His Beloved Lucille

The highly anticipated Season 6 finale of The Walking Dead will introduce one of the biggest baddies of the franchise, Negan. The leader of The Saviors, Negan is a sociopath with a love for swear words who wield ones hell of a weapon — a bat wrapped in barbed wire that he affectionately refers to as Lucille. Fans got a first look at Negan and Lucille during the finale promos, leading many to wonder what is the backstory behind Negan's bat.

Well, then it may be a while before they hear the history of Lucille. Even readers of the comic book series don't know a whole lot about the bat that, as Negan says, loves the taste of blood. (FYI, that's also why Negan refers to her as a vampire bat. True story.) What is obvious is that Negan adores her and treats her like a person. In a speech to Rick, Negan confesses his love for Lucille by saying:

You may think this is an inanimate object. An inconsequential piece of wood wrapped carefully in barbed wire. . . Not something to be cherished. And you'd be dead f*cking wrong. That is a lady... But at time,s yeah she ain't so nice... Truth is... Lucille is a b*tch. this b*tch has saved my life more times than I can remember. She's the only b*tch I've ever truly loved.

It's pretty obvious that Negan cares more about his bat than anything, possibly anyone. The only time he's ever shown an ounce of emotion is in Issue 113 when — spoiler alert for those that don't read the comics — Lucille took a bullet during a ballet and lost a chunk of her "body." Though she was still, for lack of a better term, alive, seeing his precious lady wounded caused Negan a great deal of pain and led to him lashing out at anyone in his path.

It is unclear how Lucille came to be, as there is little in the comic about her and Negan's backstory. Many believed he owned Lucille prior to the apocalypse and simply made her more badass. Fans also got a slight glimpse of her during a Negan-related easter egg in Episode 15, "East." One thing they do know about Lucille is her future and that fact that she will help Negan kill a main character in the finale, airing April 3.

As of now, the theories on who Negan will kill in the finale are running rampant on the Internet. Some even speculate that fans won't find out Negan's victim until the Season 7 premier, and for good reason. In an interview with The Hollywood Reporter, comic book creator and series's executive producer Robert Kirkman said "it's entirely possible there's going to be a painful summer for Walking Dead fans." Then again, the pain may stem from seeing one of their favorite characters die at the hands of Negan.

The only way to find out is to tune into AMC on April 3 for the 90 minute finale.