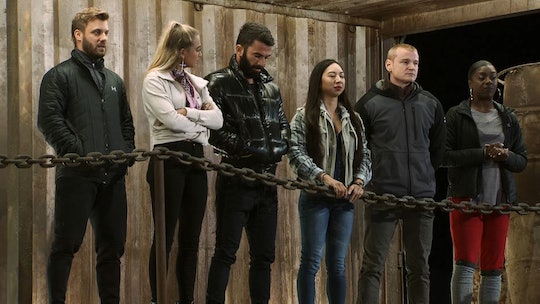 'The Challenge: War Of The Worlds' Final Competition Is Going To Be Intense

Nothing says "put your life in danger" more than a $750,000 prize on the line. And judging by the last competition on this season of The Challenge, it is going to be a doozy. As if the competitors didn't already put their bodies through enough this week, the preview for next week shows that there is something much worse in store for them. So, what is the final competition on The Challenge: War of the Worlds? This week’s challenge sent Paulie home because it was so intense, so obviously the competition that will determine this season’s winner is going to be that much more difficult.

In the preview for next week’s episode, TJ explains to the finalists that they will have to compete in a strenuous 50 mile challenge in order to win the coveted prize money. It looks like it takes place in the desert and that not all of the competitors will make it to the end or even close to the end. It looks like Ninja Natalie, Turbo, Cara Maria, and Hunter are among the contestants who succumb to the difficult challenge ahead and it could be an intense obstacle course that takes them each out, one by one, until there is one player left standing at the end of it all.

In The Challenge: Battle of the Exes, the finalists spent two days racing to the top of an actual glacier in Iceland. That season, it came down to seconds as it was a race against time. Although this 50 mile race is going to be done in the heat rather than to the top of a glacier, it still has similarly high stakes. The Challenge: Champs vs. Stars also included an intense obstacle course, but it took place at an outdoor football field rather in the middle of nowhere. This time around, it looks like it really is any man and woman for him and herself and if it becomes too much for them, they are out.

Last season, the finalists were in a race against the clock to make it to the end of the competition the fastest. The final competition on War of the Worlds involves being timed, figuring out where to go in the desert, and pushing themselves hard so they can win the prize money. But it probably isn't going to be easy for either the rookies or the veterans. Like most final challenges on the show, it is likely going to be stressful and unexpected at every turn. Plus, they are all stuck doing this alone rather than with partners. Despite some of the stronger competitors giving it their all, I don't think it is going to be easy for anyone.

Right now, there are still a handful of players who could win despite how difficult the final competition looks. My money is on one of the rookies since they certainly have the numbers at this point and Cara Maria looks like she is in pain during the competition next week. There is a chance that Wes could come out on top since he has been so strong so far, but before the finalists have to make it to the last competition this season, they might have to compete on the Killing Floor. The stakes are higher than ever and next week’s final competition is going to be bananas.