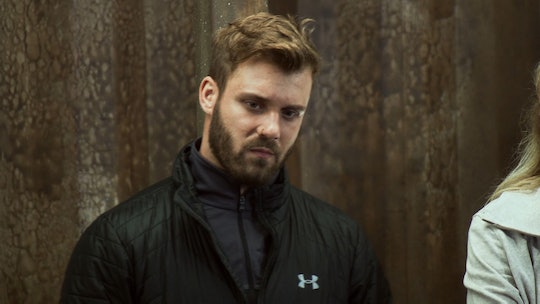 Paulie Could Be A Returning Vet In 'The Challenge' Season 34

Whether you love Paulie, can't stand him, or just admire the game he has played this season, you can't really deny that The Challenge hit gold when he was cast last season. Before MTV, Paulie was known as the pompous competitor on Big Brother and now that he has proven himself worthy of a much more high stakes competition, you have to admire his tenacity. With the season coming to an end, fans are likely wondering if Paulie will be in The Challenge Season 34 and I honestly wouldn't be surprised if he was asked back.

Although the official cast for The Challenge Season 34 hasn't been announced yet, Paulie brings both the drama and a competitive spirit to the game that viewers thrive on. He also has yet to win a season, so there's no reason not to have the fierce competitor back to prove himself again next season. There is a chance, however, that producers might let him sit out for Season 34 and ask him back later on down the line. Paulie has the potential to go down as one of the more memorable Challenge veteran players, like Wes or Johnny Bananas, so I definitely don't think this is the last fans have seen of him on the show.

Lately, both Cara Maria and Paulie have been posting about traveling on their respective Instagram accounts. It could just be because they are enjoying their off time now that filming The Challenge Season 33 and its reunion are behind them. But it could also be in preparation for filming a new season. They might be getting their fill of freedom before they both step back into the competition. Neither have really stopped training and they seem like they are still in peak physical form to return in Season 34 and take out their opponents. Maybe next season of The Challenge could have couples pitted against other couples to really *challenge* relationships.

The Challenge typically airs twice per year — once at the start and then again in the summer. If the schedule this year is the same as those of the past, then Season 34 will likely start filming in the next month. So even if Paulie and Cara Maria are active on social media, it could be because Season 34 filming hasn't yet begun.

Despite being a newbie last season, Paulie quickly proved himself to be a strong competitor who could go up against some of the best veteran players. This time around, he was considered a vet himself and it showed. So far throughout his time in The Challenge franchise, Paulie has already won nine competitions total and got himself out of multiple Killing Floor elimination competitions. He might sometimes overdo it with the Cara Maria PDA, but you can't deny that the guy knows how to compete and play a strong social game. Those are the main qualities you see in Challenge winners and since he hasn't yet won a season, it would be almost unheard of not to allow him back for another shot.

Cara Maria did recently post a video of herself with Paulie and the song "Bad Boys for Life" playing in the background. Some fans might take that to mean she is hinting at the pair not being done with The Challenge just yet. And if that's the case, I feel like there's a good chance Paulie will be back for Season 34. Right now, it is all speculation, especially since MTV hasn't made any official cast announcements. But until Paulie says that he isn't coming back, I definitely wouldn't count him out for The Challenge Season 34.