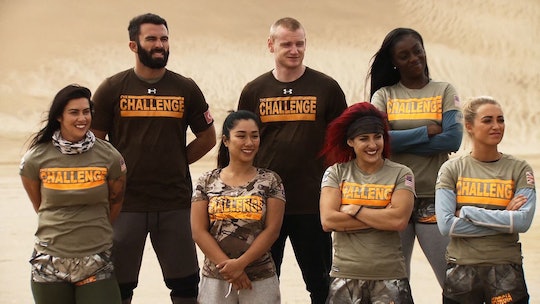 It seems like just yesterday that Kyle and Paulie were fighting over the same woman and Hunter was getting frustrated with himself during competitions. Maybe those have both been running themes this season, but it doesn't make it any easier to believe that the end is coming soon. It’s getting down to the wire and when The Challenge: War of the Worlds finale airs, only one player will be awarded the $750,000 prize. And it’s not going to matter how many times Hunter threatened to leave the game or how much trash was talked between Kyle, Paulie, and Cara Maria.

Right now, it's still anyone’s game. There are plenty of veteran players left in the mix to try and dominate the competitions, while strong rookies have risen up to prove themselves. Judging by past spring seasons of The Challenge, Season 33 is likely 16 episodes long, including the finale special, so that means there are only a handful of episodes left to narrow down the players and give viewers this season’s finalists.

As long as there aren't any unforeseen breaks in airing episodes and War of the worlds is on a 16 episode schedule like every other season that airs this time of year, the finale should air on May 15 with the reunion premiering the following week on May 22. And if that’s the case, these last few episodes of The Challenge this season are going to be bananas.

The only thing better than watching a player rise up and win The Challenge is watching everyone get into it on the reunion special, so I can understand if fans are more antsy for that than The Challenge finale next month. There is a lot of dirty laundry to air out between Bear and Georgia, who had a fling in The Challenge house while he maintained a relationship with someone else back home. Kyle, Paule, and Cara Maria are likely going to go at it (again) and air their grievances with each other (again). But I highly doubt anything will be resolved because these three seem to thrive on their non-romantic love triangle.

But before we can get to the glory that is sure to be The Challenge Season 33 reunion, the winner has to be awarded in the finale. Right now, there are a few strong competitors who I could see winning this thing, while others might have to come back next season for another chance.

Paulie might seem like he’s all talk, because he really does love to talk, but I could see him at least making it to the final competition this season. I could also see his former partner and Challenge rookie, Ninja Natalie, excelling to the finals. Turbo is another rookie who didn't even seem like a newbie this season. He has bested so many players in different competitions while remaining everyone’s friend. It’s pretty impressive and he might even be the most deserving of all of the players right now.

Mattie also stands a strong chance of winning The Challenge this season because she, too, has proven that she’s strong, relentless, and willing to strike up deals with former foes in order to make her own game stronger. Sadly for players like Wes and Hunter, who are true Challenge veterans, I can't see them taking home the money this season. Hunter is still a little too hot-headed and Wes might have spent too much time politicking this season. I get that it’s an important aspect to game play, especially for the long run, but there are still a lot of strong competitors left who could best him in the end.

The next few weeks of The Challenge will help weed out the players who don't quite have what it takes, and before you know it, the finale will be here and another player will be $750,000 richer.