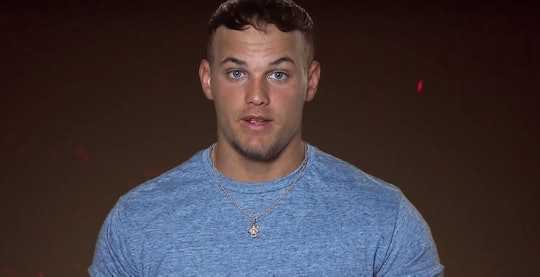 It wouldn't be a season of The Challenge without at least one player threatening to quit. Honestly, it probably wouldn't take me long to throw in the towel because these competitions are intense. And in the preview for next week's episode, Hunter seems done. He pulled something similar before this season when the tire challenge was too much for him. Then, he had a teammate, but now he’s riding solo, so will Hunter go home on The Challenge? Now that the other players are dropping like flies, it’s starting to get down to the wire and if he pulls out now, he will be saying goodbye for his chance at $750,000 that he wouldn't have to split with anyone or worry about a partner keeping for herself.

Maybe he still has Challenge PTSD from his tumultuous partnership with Ashley, but this is no time to quit. He and the other competitors are in the home stretch and if he has come this far, it would be a shame to give up all of the hard work he already put into his game. In the preview, Hunter actually has his bags packed and it looks like they have all just returned to the house from a competition.

He might have come in last and thinks he will be voted to the killing floor anyway, but in the scene, Wes tries to talk him down. He tells Hunter that he has already come so far, but Hunter says in his voiceover that he doesn't feel like he has what it takes to continue in the competition that he "isn't enough."

Clearly, Hunter has the athletic ability and talent to have gotten this far in the game, but it’s easy to get discouraged when the most recent competition took it out of you. That might be what Hunter is going through in the preview for next week and although it seems like he’s ready to call it, I don't think that will be the case.

Earlier in the season when he was ready to quit the game during the tire stacking competition with Georgia, TJ called him out for quitting and Hunter seemed like he was pretty over the game in general. He ended up coming back from that and he has kept himself safe for the entire season so far. There is no valid reason for him to pack his bags and leave without losing on the killing floor first.

Hunter doesn't even have any clear enemies in the house right now. He got into a fight with Turbo last week, but it looks like they have both moved past it. His showmance with Nany is flourishing and he has remained out of the Kyle, Wes, and Paulie drama triangle. In fact, he has played on different competitor’s sides while remaining safe from the spotlight himself. My guess is that the competition in next week’s episode is just epic and strenuous enough to have taken the fight out of Hunter, if only for a little while.

I’m sure that if anyone can convince him to stick it out, it’s Wes, but if the competition is as hard as it looks in the preview, Hunter might need to decompress before he’s ready to continue in the game. It’s not like these kinds of challenges are new to Hunter. He is one of the veteran players who has done this before and he has been in the thick of it. Hunter might feel like he’s ready to quit the season before even being thrown on the killing floor, but chances are, he will stick it out to try and win that prize money.