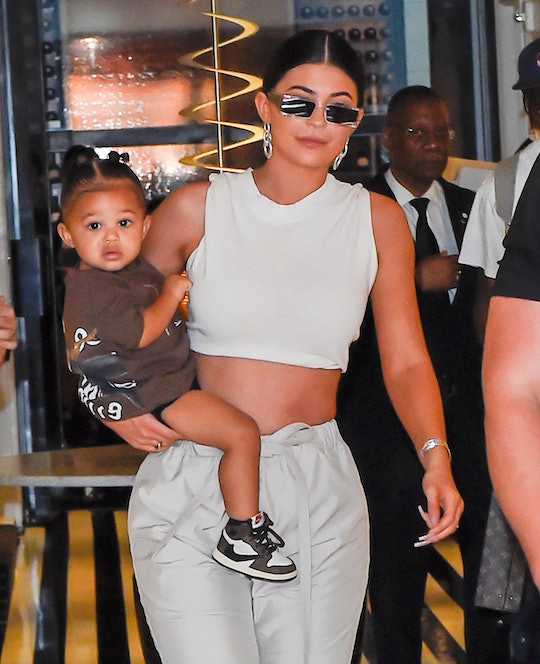 So What Exactly Is The "Fruit Snack Challenge" Kylie Jenner Tried With Stormi?

How patient is your toddler when it comes to eating their favorite snack? Well if you really want to know, you should try out the Fruit Snack Challenge like Kylie Jenner and Gabrielle Union did with their toddlers recently. The viral trend can help answers some interesting questions about your kids pretty quickly and also makes for entertaining videos.

The Fruit Snack Challenge — or the Candy Challenge or even the Patience Challenge, as it has also been called — has become a trend on TikTok in recent days. To do the challenge, a parent or caregiver puts a snack in front of a toddler and tells them they can have some if they wait. They leave the room but film the little one to see if they'll try to take the snack and, of course, there's been varying and hilarious results.

This challenge is actually based on the Marshmallow Test first conducted by Stanford University psychologist Walter Mischel in the 1960s, as O Magazine reported. According to The Atlantic, Mischel and his team of researchers would put a marshmallow in front of a child and tell them that if they waited 15 seconds to eat it they could have a second one. Researchers used this test to look at the effect of delayed gratification and willpower in toddlers, and the Fruit Snack Challenge is sort of the same.

Some toddlers like Kylie Jenner's 2-year-old daughter Stormi Webster did very well. She sat in front of a bowl of candy alone and sang, "patience, patience, patience" to herself instead of just diving in when her mother left the room, as Jenner proudly shared on Instagram.

It's possible that kind of patience comes with age. Gabrielle Union's daughter Kaavia James was born in November 2018 and is not yet 2 years old, which could explain the fact that her mother was barely out of the room before she dove right into her own snack bowl.

While the Fruit Snack Challenge is a fun way to see how patient your kids are when they're not being watched, parents shouldn't get too stressed out if their kids dive in face first the minute their backs are turned. The Marshmallow Test might have heralded delayed gratification as a benchmark for future success, but a more recent study from 2018 published by New York University and the University of California found there might not be as much of a correlation as first suspected. Meaning perhaps that both Kaavia James and Stormi Webster are just cute kids with different personalities. They just have different levels of snack needs, and I really relate.