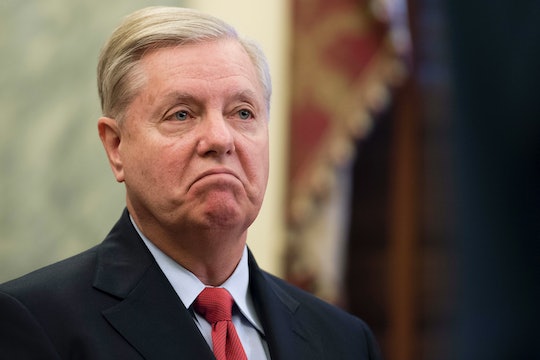 Here's What You Need To Know About The Graham-Cassidy Bill, The Latest Trumpcare

Just when it seemed like Senate Republicans were all but finished trying to repeal the Affordable Care Act, two Senators have reared their heads like a GOP-backed Medusa trying to freeze health care coverage for millions of Americans before the month ends. What is the Graham-Cassidy amendment? Yes folks, Trumpcare is back — and it's even worse this time. (For the third time? Fourth? I don't even know anymore — it's the "I've lost count" time at this point.)

Let's recap the year of the Obamacare repeal and replace that has yet to really materialize: In March, the House Speaker Paul Ryan pulled the American Health Care Act from a vote, because the votes just weren't there. Also? The AHCA was a terrible bill. Just awful. After lots more terrible, awful amendments, the ACHA passed in the House in May. But remember, it takes two bodies of the U.S. government to tango into law, so it was up to the Senate to get its legislative act together on repealing the ACA.

In May, Senate Majority Leader Mitch McConnell got together with 12 other white male senators to repeal and replace the Affordable Care Act to then introduce the Better Care Reconciliation Act in June. The BCRA was also a hot legislative mess that would force millions of Americans to lose their health care coverage. It went through several equally terrible revisions. Since June there's been a "skinny" bill that failed, a Senate vote-o-rama with a "repeal only" bill that failed, and Sen. Bernie Sanders has introduced a single payer health care bill — that will also likely fail.

Still with me? Yeah, I know — this is kind of ridiculous. Not like the GOP is toying with the literal lives of millions of Americans who have health care coverage thanks to the ACA. Enter: The Graham-Cassidy repeal bill.

Republicans face a looming Sept. 30 deadline to either sh*t or get off the pot to repeal the Affordable Care Act. Sens. Bill Cassidy and Lindsey Graham have introduced their version of repeal and replace (read: Trumpcare) that is arguably probably the Republicans' worst attempt yet. Graham-Cassidy slashes federal funds on health care overall, while forcing states to pay up front if they want to keep the ACA as it is in their state — effectively punishing states for choosing to stick with Obamacare.

According to the Center on Budget and Policy Priorities, Graham-Cassidy would not only eliminate pre-existing condition coverage protections, but would give insurers the ability to raise premiums the moment you got sick — which is, oh you know, completely opposite of how health insurance is supposed to work. Just a quick reminder: The GOP has had seven years to come up with something "better" than the Affordable Care Act, and yet it's painfully obvious they still have no idea how insurance is actually supposed to work.

But Graham-Cassidy doesn't end at gutting care and premium protections: it would end Medicaid expansion, swap marketplace exchange subsidies for block grants with a formula that allows states to change who gets funding based on shifting, inconsistent factors such as population density and poverty rates, and yes, Graham-Cassidy would defund Planned Parenthood for a year — a provision from previously failed ACA repeal attempts.

While the Congressional Budget Office has not yet scored Graham-Cassidy, it's not looking good. Bottom line: Graham-Cassidy would essentially revert the country to pre-ACA era provisions with even worse and longer lasting effects to the American health care system, none of them for the "better care" of Americans at all.

More Like This
This Is What It’s Like To Parent With OCD Right Now
Louisiana Candidate Katie Darling On Giving Birth In Her Viral Campaign Ad
How To Help Families Impacted By Hurricane Ian
Kids With Head Lice Don't Need To Miss School, AAP Stresses In Updated Guidelines